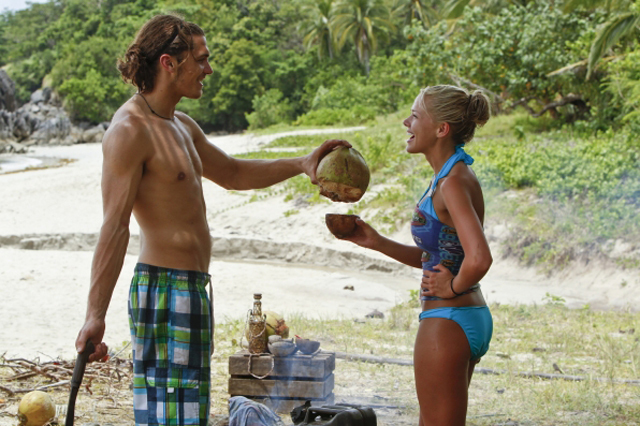 (CBS News) It's no secret that Russell Swan is in trouble.

Two weeks into "Survivor: Philippines," Russell's tribe has the distinction of losing every challenge so far, not to mention two tribe members. (Spoiler alert)

The dysfunctional Matsing tribe got a lot of air time Wednesday night and for good reason. The departure of Zane in the game's first tribal council did nothing to ease Russell's paranoia or motivate his four tribemates.

One of three returning "Survivor" veterans - all three left the game in medical evacuations, Russell realized his head was on the chopping block and made yet another promise to tone down his bossiness.

In fact, at the challenge, instead of making assignments, he asked for volunteers, only to be turned down by Roxy and Angie. Meanwhile, Angie and Malcolm have taken to cuddling up in the shelter at night, something that sends up a red flag to others. As Boston Rob and Amber proved in an earlier game, there is no alliance tighter than a romantic one.

But instead of ousting one of those two, the tribe chose to get rid of Roxy, who blew the whistle on the lovebirds. Of course, there's some very good reasons for that. Roxy is annoying, always whining about the rain and showing a lot of animosity to Angie.

On the Tandang tribe, RC finds a clue to the hidden immunity idol and shares it with Abi-Marie. But this does nothing to ease Abi's growing suspicion about RC's bond with leader Michael Skupin who was evacuated from the second "Survivor" game years ago. RC is surprised by Abi's accusations. Meanwhile, former "Facts of Life" star Lisa Whelchel continues to make her tribemates uncomfortable. Lisa, who professes to be shy and lonely, goes off by herself for a pity party, only to have her actions misconstrued as a search for the idol. It looks as if her stay in the Phillipines might be a short one.

The other celebrity castaway, former baseball star Jeff Kent, is nursing a bad knee on the Kalabaw tribe and is grateful for the rain which keeps the tribe in the shelter instead of working on the beach. The tribe's leader, Jonathan Penner, continues to annoy his colleagues with his desperate - and solo - search for the idol. He ends up finding it. And that may be lucky for him because no one was fooled by his explanation that he was searching under the shelter for a lost contact lens.

Tell us, what did you think of this episode and who will win the game?