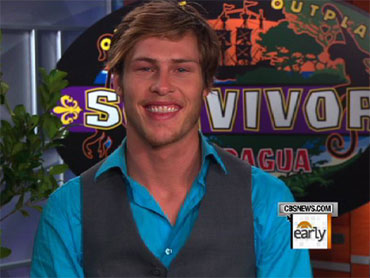 Jud "Fabio" Birza, the 21-year-old winner of "Survivor: Nicaragua," picked up his $1 million grand prize on "The Early Show" Monday.

What's the youngest victor in 21 seasons of the show going to do with his winnings?

The Californian said, "Dude, I'm going to have a lot of fun. Arts and crafts day every day. I'm going to travel the world. I'm gonna hang out."

Known for his cool, friendly demeanor "Survivor," Birza said he knew he was a favorite for the win.

Co-anchor Jeff Glor said, "Fabio, you kind of came in as the jokester -- some people said, the dumb blond, didn't necessarily strategize as much, the nice guy, the innocent guy. People wondered whether that would work in the end. Did you ever question whether it would?"

Birza answered, "Uh, no. I basically just talked myself into it. Every day, I basically said, 'It is working,' you know. 'It's happening, just keep it up, you are getting good response.' And it was fun."

Birza won five votes, trumping Chase Rice, a 24-year-old professional racecar jackman from North Carolina. Rice won $100,000 on the show. He said it was fun to give Birza a run for his money.

For more with "The Survivor" winner and runner-up on "The Early Show," click on the video below.