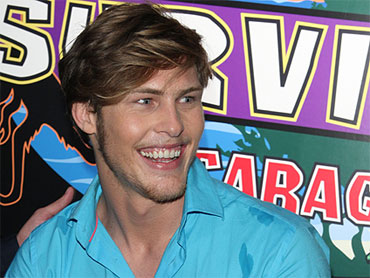 Birza was to collect his $1 million prize check on CBS' "The Eearly Show" on Monday morning.

"From how I felt down in Nicaragua, going through all the angles or whatever, I really thought I was going to win by a little more," Birza said during a phone interview following the finale. "It's all good, dude. I would rather it be super close. Chase felt good about it. As you could see, I was sweating. My armpits were going crazy. I was nervous."

Birza, nicknamed after the romance novel coverman by his tribemates, secured his place in the final trio by dominating the last three immunity challenges and breaking up the alliance of Rice, Lenahan and 44-year-old swim coach Holly Hoffman from South Dakota. The jury lashed out at schemers Lenahan and Rice, who came in second behind Birza with four jury votes.

"I am remorseful," said Lenahan. "I did have to backstab nine people."

The Nicaragua-set 22nd season, which began by dividing the 20 contestants by age, featured the show's first-ever double ditching: NaOnka Mixon, a 27-year-old gym teacher from Los Angeles, and "Purple" Kelly Shinn, a 20-year-old nursing student from Arizona, quit the 39-day survival contest on the 28th day, though both still served as members of the jury.

"I had enough," Mixon declared during a reunion of the castaways.

At the end of the finale, host Jeff Probst revealed a new twist for the upcoming 22nd season. "Survivor: Redemption Island" will feature booted contestants living together and dueling for a chance to return in the game. He said those eliminated will have the same supplies as the other competitors. "Redemption Island" is scheduled to premiere Feb. 16.