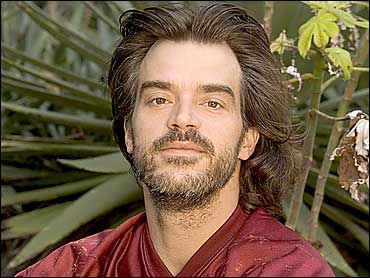 Good thing Shane Powers spent so much time strutting around with no clothes on while competing on "Survivor: Panama-Exile Island." Because if that was the thrill he needed, he got it. The million dollars, well, that's someone else's big smile.

Shane, the 35-year-old owner of an entertainment marketing company, was stunned as the castaways he thought were his alliance — Cirie and Aras — teamed up with Danielle to get him kicked out of the game in a 3 to 2 vote.

"I got duped. I was blindsided," said Shane, as he was sent packing. "I really thought that Cirie, Aras and me were locked in."

During his interview Friday on The Early Show, co-anchor Harry Smith observed that the look on his face at tribal council, as it became clear he was being ousted, "was absolutely priceless. You had no idea."

Echoed Shane, "I had no idea. I mean ... I knew the game, and I knew that there was a possibility that I had made my bed. I had boxed myself in (through an alliance) with Aras and Cirie, obviously. And I thought that we'd hold true."

Episode 12 otherwise was a story of love, longing, scheming, snakes and sand.

The snakes, fortunately were wooden (who says the game's producers have no heart?!), and no one was required to eat them, although it was a must to get friendly with the serpents as part of the reward challenge with the game's best prize yet: face-to-face time with a loved one, and the power to choose who else gets to do the same.

Emerging as the Reward champion du jour, Terry was quick to choose his wife, Trish, and Shane's son, Boston, to accompany him and Shane to a villa for an overnight stay.

Shane told Smith: "I think you gain an amazing amount of perspective from being on the show. It's, like, you're civilized and then they turn you into a caveman, and you learn how to deal with all of that. And then you really, everything that's important is just right there in front of you."

Shane made a special point of expressing thanks to Boston's mother for "allowing us to play. She's been the real cornerstone of both of our relationships, and I can't thank God enough for her."

Back on Episode 12, Terry then sent Cirie's husband, H.B., back to camp, and gave Aras a hug from his mom. Danielle meanwhile had only a few seconds to talk to her mom, Denise, before being banished to Exile Island.

Back at camp, H.B. got a crash course in camp life, giving his wife, Cirie, a bit of a big head as it became apparent that H.B. is a fish out of water. "Seeing H.B. here green, not really knowing anything," said Cirie, "it helped me a little bit to appreciate how far I've come. It almost makes me feel like I've kind of underestimated myself for 35 years. And now it's like, damn, you can do anything."

H.B. was a good sport nonetheless and pitched in around camp, while Cirie and Aras took it easy. "Cirie and Aras have been working me like a dog, and it's bugging me a little bit," groused H.B. "I know that I'm not going to be here long, so I'm going to help as much as I can."

As the boat arrived to pick up H.B., he and Cirie got emotional. Recognizing the sacrifice Cirie is making for their family, he broke down. "Words can't even express how I feel just to know that Cirie is doing this for our family," he said. "It's wonderful to see that she would come out here and take this risk for us. She's my hero."

As H.B.'s boat left, Cirie reflected: "Having H.B. in camp brought back why I'm here. I'm not just here for me. I'm here for us as a family. I want H.B. to have a better life. I want us to have a wonderful life."

Shane expressed no animosity toward Cirie during his interview on The Early Show, saying: "It's been amazing to me to watch Cirie's journey on the show, because when she got there, she had no chance of winning. And it actually exuded out of her. And she laid low, she worked hard. Aras and I sort of looked out for her.

"And a couple weeks ago, you could really tell, something switched in her and she was like, 'I could win this.' And it's been really amazing to watch her journey."

A three-pack-a-day smoker, Shane was forced to quit cold turkey during his early days on "Survivor."

Smith concluded Friday's interview with Shane on The Early Show by asking Shane if he had any cigarettes on him. Shane replied, "I have plenty of cigarettes. Would you like one now?"

"No, no!" said Smith, concluding the segment. "We gotta go."