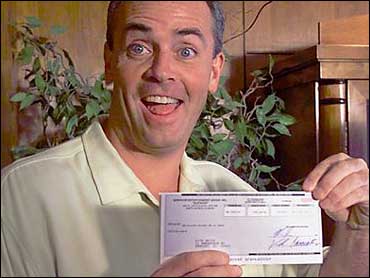 The tribe can't grant him immunity on this one.

Richard Hatch, who won $1 million in the first season of "Survivor," was found guilty Wednesday of failing to pay taxes on his winnings.

Hatch was handcuffed and taken into custody after U.S. District Judge Ernest Torres said he was a potential flight risk.

He also was convicted of evading taxes on $327,000 he earned as co-host of a Boston radio show and $28,000 in rent on property he owned. He was acquitted of seven bank, mail and wire fraud charges.

Jurors deliberated for less than a day after more than a week of testimony.

Besides the tax charges, prosecutors accused Hatch of using money donated to his charitable foundation, Horizon Bound, an outdoors program he planned to open for troubled youth. He allegedly spent the money on expenses including tips to a limousine driver, dry cleaning and tens of thousands of dollars on improvements to a house he owned.

And while Hatch proved five years ago that he can survive in even the roughest of conditions, that might have worked against him after the trial, CBS' Alison Harmelin reports. The federal judge ruled Hatch to be a flight risk, and ordered him cuffed and taken into custody.

One possible explanation for Hatch's failure to pay taxes was raised by his lawyer toward the end of the trial but was never mentioned in the jury's presence.

Hatch's lawyer, Michael Minns, said Hatch caught fellow contestants cheating and struck a deal with producers for the show to pay his taxes if he won.

CBS did not comment on the charges Friday; nor did a spokesman for "Survivor" executive producer Mark Burnett — who testified earlier at Hatch's trial.

"Survivor" has been a mainstay of CBS' lineup ever since it became a sensation in the summer of 2000 and, after "American Idol," is consistently television's most popular reality game. The 12th installment of the show, set in Panama, begins on CBS Feb. 2.

But, ultimately, Hatch was never asked about the allegation when he testified.

Instead, Minns told jurors Hatch was the "world's worst bookkeeper" and said his client never meant to do anything wrong. Hatch testified that he thought producers were supposed to pay his "Survivor" taxes, and said the donations he took from his charity were far less than the money he had already poured into it.

A poll conducted by The Associated Press and TV Guide last September found that 82 percent of Americans believe that reality shows are either "totally made up" or "mostly distorted."

The heart of "Survivor" is putting real people in stressful situations and watching how they react to one another, Thompson said.

More than five years after winning, Hatch remains reality TV's most famous villain, the man viewers loved to hate. He first captured their attention for shedding his clothes on "Survivor," prompting David Letterman to call him "the fat naked guy."

"I don't know if (viewers) care if they have the integrity that you would expect on a journalistic documentary," Thompson said.

But he made the biggest impression — and won the show — by scheming his way to the top.

He reveled as squabbles among his fellow contestants thinned their ranks, connived with teammates to stick together then pitted his allies against each other.

Early on, he used his success on the show to get more work, including a "Got Milk?" ad and an appearance on "Survivor All-Stars" — where he was voted off by fellow contestants.

He also appeared on TV game shows, including "The Weakest Link." That appearance, made on behalf of Horizon Bound, netted a $10,000 donation to his charity camp — money prosecutors said was among the funds misused.

But Hatch's shrewdness did not serve him well in the legal world. A year ago, prosecutors offered him a deal: plead guilty to two counts of tax evasion and they would recommend less than the maximum 10-year sentence.

After initially agreeing, Hatch walked away, retaining Minns as his new lawyer and appearing on NBC's "Today" show to claim that CBS was supposed to pay the taxes.

Prosecutors responded with a grand jury, which indicted Hatch on 10 counts carrying a maximum of 73 years in prison and millions of dollars in fines.

During the trial, prosecutors called witnesses, including Mark Burnett, executive producer of "Survivor."

Burnett testified that Hatch's "Survivor" contract stated he would have to pay taxes on his prize. Minns never asked him about the cheating allegation, and Burnett and CBS declined to comment about it.

"Survivor" had one brush with security in 2003. An offshore bookie suspended betting that year on who the "Survivor" winner would be when he noticed a large number of people betting on contestant Sandra Diaz-Twine, the eventual winner.

The most recent "Survivor" edition, based in Guatemala, averaged 18.3 million viewers, placing it among Nielsen Media Research's 10 most popular shows of the year. The show leads off CBS' Thursday schedule, the most lucrative night of the week for advertising revenue.