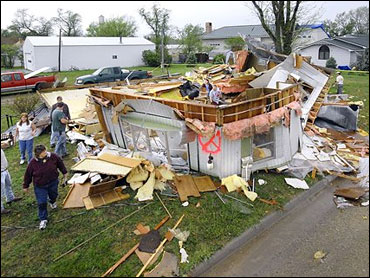 Rescue teams searching the rubble that was once Greensburg found one more victim and a survivor, raising the death toll from a powerful tornado that largely obliterated the small town to at least nine, authorities said Monday.

A report of a 10th victim proved to be a wig in the debris that was misidentified as a body.

The enhanced F-5 tornado with winds estimated at 205 miles per hour was 1.7 miles wide, as broad as the entire town, and it spun straight down Main Street, reports CBS News correspondent Hari Sreenivasan.

Greensburg has survived tornadoes before — eight have touched down since 1993 — but never like this. For a town with a population of 1,500, as few as six homes are inhabitable now, adds Sreenivasan.

Little remained standing in Greensburg but the grain elevator as the town's 1,500 residents were allowed back in to check their property. The tornado demolished every business on the main street. Churches lost their steeples, trees were stripped of their branches, and neighborhoods were flattened. Officials estimate as much as 95 percent of the town was destroyed.

One of the latest victims was found under debris in the middle of town, city administrator Steve Hewitt said. The other body was pulled from a nearby lake.

Rescue teams also found a survivor as they searched the wreckage on Sunday, two days after the tornado hit, providing hope for other discoveries, said Kansas Highway Patrol spokesman Ron Knoefel. He did not release details on the survivor's identity or condition, and authorities had not identified any of the victims.

There remained plenty of caution about what the rubble might reveal in the coming days. Since the tornado hit Friday night, emergency responders have had little indication of how many people may be safely staying with friends or relatives, rather than in shelters. The sheer amount wreckage made the search effort that much harder.

"We've been over the town twice now — all of our partners around the state, the experts from cities with technical search-and-rescue," Maj. Gen. Todd Bunting, the state's adjutant general, told CNN on Monday morning. "Some of this rubble is 20, 30 feet deep."

The search may be furthered hampered by severe thunderstorms expected to pound the southern and central Plains, dumping another two to four inches of rain as well as producing hail and high winds, with the possibility of more tornadoes, CBS News meteorologist George Cullen reported.

After a number of relatively benign tornado seasons, this year has been anything but, adds CBS News correspondent Cynthia Bowers. Already this year, 72 people have died, including 19 in Enterprise, Ala., and another 19 in Lake County, Fla. The average on a given year is 55 deaths.

Some of that search effort was stalled at midday when a tank holding anhydrous ammonia — a toxic chemical used as farm fertilizer — leaked, prompting officials to evacuate the northeast part of the town.

At the edge of the city Monday, evacuated residents waiting to get back to their homes for the first time since the tornado struck on Friday sat in a line of vehicles as police checked identification. Utility repair crews arriving from other cities added to the traffic jam.

Police also used the opportunity to collect names and compile a list of people whose whereabouts hadn't been determined.

Insurance agent Scott Spark, a 13-year resident of Greensburg, hauled papers out of his wrecked office near downtown. He had already been to his destroyed home.

"I could probably have salvaged some more stuff if I had been able to get back, but I understand how it is," he said of the restrictions. "I mean, they were still having tornadoes last night. I understand they want everybody to be safe."

The weekend storms continued into Monday across parts of the Plains.

High water in Topeka forced hundreds of people out of their homes early Monday, closed schools and blocked streets and highways around the state.

"The rescuers brought rafts up to the houses. My car's flooded in right now," Kim Moore said of her Topeka neighborhood.

In southwest Iowa, nearly 1,600 residents of Red Oak and all of tiny Coburg were urged to evacuate Monday as the East Nishnabotna River and a creek rose out of their banks. Flood stage at Red Oak is 18 feet, but the river had already hit 25.7 feet early Monday and was still rising, said Adam Wainwright, emergency management coordinator for Montgomery County.

One man drowned in western Oklahoma when a flood swept his vehicle off a rural road, authorities said.

The National Weather Service classified the Greensburg tornado as an F-5, the highest category and the first F-5 since it revised its scale this year to more comprehensively gauge damage potential, with less emphasis on wind speed. The last tornado classified as an F-5 hit the Oklahoma City area on May 3, 1999, killing 36 people.

The wreckage in Greensburg also led to allegations of looting. Four soldiers from Fort Riley and a reserve police officer were arrested Sunday on suspicion of looting cigarettes and alcohol from a Greensburg store, state officials said. The soldiers had not been assigned to help in Greensburg, said Sharon Watson, a spokeswoman for the Kansas adjutant general's office.