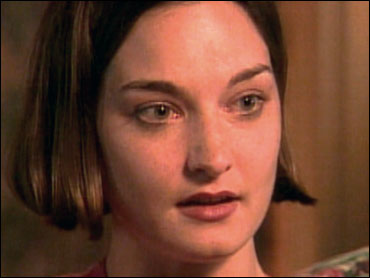 As Kobe Bryant awaits trial on sexual assault charges, most media outlets have chosen not to identify his accuser, which is standard policy in rape cases.

But one young rape survivor in Texas has identified herself, and is encouraging others to consider doing the same. The Early Show Correspondent Tracy Smith has her remarkable story.

A young woman says: "My name is Bridget. I was raped and shot in this field." Because of the stigma attached, it's not often that you hear the words or see the face of a rape survivor. But Bridget Kelly is determined to get her story out.

Bridget says, "There is no way that anyone is going to make me feel ashamed of being raped."

What happened to Bridget is every woman's nightmare. On June 21, 2002, she was taken from her apartment at gunpoint.

She says, "I walked up to the peephole and looked out and I watched as a man ran directly at my door and kicked it in."

He robbed her, took her car, and drove her to an abandoned field on the outskirts of a new subdivision, where he raped her.

Bridget says, "I remember it as if as I was lying there and as he was on top of me - it was like God was holding my hand and he was saying, maybe he was saying something like, 'Just hold on, hold on, I've got you.'"

Bridget continues, "When he was finished with me, he got up and told me to get up and instructed me about where he wanted me to stand. And..."

He told her to turn around. And he shot her. She crumpled to the ground. He shot her two more times, and when she didn't move, he drove away in her car, leaving her for dead.

Bridget says, "But I stood up. And I didn't fall. And I looked down at myself and I could see that I was naked and bloody and scratched but I was upright."

In the distance, Bridget could see the lights of houses - her only hope for survival. Somehow, she gathered the strength to run.

She says, "There was something stronger in me right then, which was, I think, just the drive to survive and to get to those houses and that subdivision."

She ran 200 yards and collapsed on the doorstep of Army veteran Frank James. He recalls, "She was a mess. And I could see she'd been shot. I could see two bullet holes."

James covered her with a blanket, and called for an ambulance.

In his 911 call, he told authorities: "She's been raped and shot. She's bleeding all over the place."

Bridget was rushed into surgery to repair damage to her stomach, liver, diaphragm, colon, intestines, and spleen. Six and a half hours later, doctors had saved her life.

Bridget's father, Mike Kelly, says, "I got this call from Texas, from a detective who said, 'Are you the father of Bridget Kelly?' And you know what's going to be said next isn't good."

Bridget's father, a newspaper columnist in Omaha, Neb., got to Texas and to his daughter's side as quickly as possible.

Mike Kelly says, "She couldn't speak because she had tubes in her everywhere including her nose, and her mouth, but she made a little motion with her hand like she wanted to write."

Bridget continues, "And so he pulled out his reporter's notebook. And gave me a pen."

Bridget began filling the book with her thoughts that she'd been thinking about her family during the attack, and how much she didn't want to die.

Mike Kelly says, "At one point, I said that her story was hitting the news."

Bridget notes, "I had written in the notebook in that first conversation, 'It's OK if they say rape.'"

Mike Kelly points out, "She was already thinking at that early point that she was not going to be ashamed - that she had done nothing wrong - that there was no stigma against her."

It was those words: "It's OK if they say rape," that launched this father-daughter team's battle against the stigma of rape. With permission of his editors, Mike Kelly wrote a column called: "A Plea For More Openness About Rape."

Bridget says, "And so that July 25 column that he wrote began, 'Now you don't have to read between the lines and wonder...'"

Bridget says, "It was so powerful and liberating for me to have him write those words."

It may be hard for people to wrap their minds around the idea that being exposed as a rape survivor is powerful and liberating.

Bridget says, "I think because it was my choice. It was very important that I got to say I want my name out there. Use my image."

And that's why, just seven months after the attack, Bridget returned to the field where she was raped to record public service announcements.

It says, "The first step of becoming a survivor is to talk about it. We derive strength from each other and to connect like that is such a feeling of comfort."

Bridget's gone public, not to pressure others to do the same, but to show other survivors they are not alone.

Mike Kelly says, "She's not saying that everybody needs to be in the paper or go on television, but everyone needs to get help."

Today, Bridget has returned to work as a first grade teacher.


And while she says that awful memory will always be a part of her. She's gained strength by sharing it.

Bridget Kelly's attacker was arrested later the morning of the rape after he returned to the scene to show off Bridget's dead body to some friends. He's currently in prison and not eligible for parole until 2052.