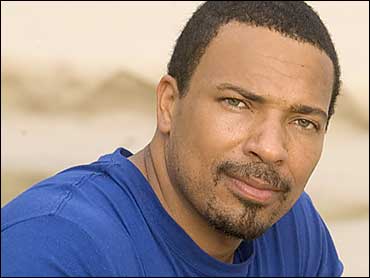 You could call it Tribe Bites Dog. Bobby 'Bob Dog' Mason, that is - the 32-year-old Los Angeles attorney who is the latest contestant to be kicked out of the game on "Survivor: Panama-Exile Island."

Bobby's unpopularity with the Casaya tribe's women, along with the tribe's perception that he might flop after the merge, sealed his fate on Thursday night's show in a 3-2-1-1 split decision.

Realizing Episode 5 was the end of the line for him, Bobby had a few choice words for his former tribemates: "People in Casaya were bonded together out of weakness, out of desperation. Courtney, Danielle, and Shane--spineless little twerps all of them--just being around them made me want to throw up."

The ouster vote from Courtney may not have been much of a shock: earlier in the game Bobby called her "one of the two most annoying people in the history of the world" after he and Bruce drank up the Casaya tribe's last bottle of wine.

, seen only on The Early Show revealed how a night of drinking started on a warm note, before taking an ugly turn. As the wine was flowing, Bobby found himself the center of attention.

The secret scene continued to show Bobby and Bruce, in the outhouse, downing the last bottle all alone. But to hear Bobby explain it in with co-anchor Rene Syler, it wasn't really their fault.

"We won four bottles of wine and as soon as we got there, Danielle and Courtney started acting like they were first week freshmen in college and they started guzzling it," he said.

"Ask yourself why two grown straight men would voluntarily go hang out in an outhouse together. The answer is it wasn't voluntary. We did get booted out of that shelter," he told Syler. " I don't know why you'd do that to two guys that could take you apart with their bare hands. Maybe it's a misunderstanding. We're supposed to be a team."

Bobby didn't mince words when it came to his feelings about Courtney. "One of her personalities is cool," he said. "She's got like three or four that she tucks away and every now and then a nice one will come out and you'll make a deal with her. And then, the next day, that nice one won't wake up. She's a lunatic."

He had equally harsh words for Shane. "Shane is a smart guy," he said. "If he's going to talk about me, he better do it behind my back. He doesn't want to end up smashed somewhere in the ocean with his acid-washed jeans and that mullet."

For Courtney, the wine incident clinched it. "I would have to be dead and someone would have to literally pour it down my throat for me to drink the last bottle of wine that we as a tribe won," said an indignant Courtney on the show last night, as she confronted the buddies, found sleeping in the outhouse with the empty bottle.

"Courtney definitely had a right to be upset," admitted Bobby. "I just don't need to hear it. Like I really don't care what she thinks."

Overconfidence, perhaps left over from his earlier moment of transitory triumph when his skill with a cleaver and a fish won a reward challenge for Casaya, scoring about a hundred pounds of fish, beans, rice and wine (yep, that same wine which proved unlucky later) for a tribal feast.

Strangest squabble of the night: Aras, the 24-year-old California yoga instructor, clashing with Bruce, criticizing the 58-year-old karate and survival teacher for building a Zen rock garden on the beach as the rest of Casaya did chores, including trying to build a fire to boil water.

Slammed by Aras for his seemingly skewed priorities, Bruce admonished Aras for making a "childish comment." Fed up, Aras fired back: "I'm the youngest person on this tribe, and sometimes I feel like I'm the oldest one in this tribe. And maybe I need a little break, a little calmness. To be perfectly honest, I kinda want to go to Exile Island."

That's what happened to Terry of La Mina. As for his tribe, after losing the reward challenge, it was beans for dinner. Hungry La Minas dug in, but it wasn't long before two La Minas - Nick and Austin - were sorry about the eagerly devoured meal.

"This sucks!" wailed Austin, a 24-year-old novelist and model in no mood to wait for a better turn of phrase.

Then again, he's still in the game, so Bobby's tale of woe might be a topper.