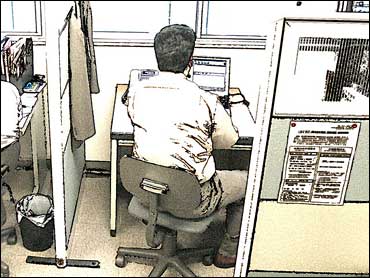 We can't get no job satisfaction.

Even Americans who are lucky enough to have work in this economy are becoming more unhappy with their jobs, according to a new survey that found only 45 percent of Americans are satisfied with their work.

That was the lowest level ever recorded by the Conference Board research group in more than 22 years of studying the issue. In 2008, 49 percent of those surveyed reported satisfaction with their jobs.

The drop in workers' happiness can be partly blamed on the worst recession since the 1930s, which made it difficult for some people to find challenging and suitable jobs. But worker dissatisfaction has been on the rise for more than two decades.

"It says something troubling about work in America. It is not about the business cycle or one grumpy generation," says Linda Barrington, managing director of human capital at the Conference Board, who helped write the report, which was released Tuesday.

Workers have grown steadily more unhappy for a variety of reasons:

- Fewer workers consider their jobs to be interesting.

- Incomes have not kept up with inflation.

- The soaring cost of health insurance has eaten into workers' take-home pay.

The findings coincide with a CBS News poll that reports that more than one in four says they have worse opportunities than their parents' generation.

The poll was taken as part of CBS News' "Where America Stands" series, an in-depth look at where the country stands today on key topics and an outlook for the future decade.

If the job satisfaction trend is not reversed, economists say, it could stifle innovation and hurt America's competitiveness and productivity. And it could make unhappy older workers less inclined to take the time to share their knowledge and skills with younger workers.

Nate Carrasco, 26, of Odessa, Texas, says he's been pretty unhappy in most of his jobs, including his current one at an auto parts store.

"There is no sense of teamwork in most places any more," Carrasco gripes.

One clue that may explain workers' growing dissatisfaction: Only 51 percent now find their jobs interesting - another low in the survey's 22 years. In 1987, nearly 70 percent said they were interested in their work.

Workers who find their jobs interesting are more likely to be innovative and to take the calculated risks and the initiative that drive productivity and contribute to economic growth, Barrington says.

"What's really disturbing about growing job dissatisfaction is the way it can play into the competitive nature of the U.S. work force down the road and on the growth of the U.S. economy - all in a negative way," says Lynn Franco, another author of the report and director of the Conference Board's Consumer Research Center.

Conference Board officials and outside economists suggested that weak wage growth helps explain why workers' unhappiness has been rising for more than 20 years. After growing in the 1980s and 1990s, average household incomes adjusted for inflation have been shrinking since 2000.

Also, compared with 1980, three times as many workers contribute to the cost of their health insurance - and those contributions have gone up. The average employee contribution for single-coverage medical care benefits rose from $48 a month to $76 a month between 1999 and 2006.

Workers under 25 expressed the highest level of dissatisfaction. Roughly 64 percent of workers under 25 say they were unhappy in their jobs. The recession has been especially hard on young workers, who face fewer opportunities now and lower wages, some analysts say.

The most satisfied were those ages 25 to 34, who may see some opportunities for upward mobility as baby boomers retire. Around 47 percent of workers 25 to 34 say they were happy in their jobs.

Some other key findings of the survey:

- Fifty-six percent say they like their co-workers, slightly less than the 57 percent who said so last year but down from 68 percent in 1987.

- Fifty-six percent say they are satisfied with their commute to work even as commute times have grown longer over the years. That compares with 54 percent in 2008 and 63 percent in 1987.

- Fifty-one percent say their are satisfied with their boss. That's down from 55 percent in 2008 and around 60 percent two decades ago.

Carrasco said he wishes his bosses would take time to listen to workers' ideas - and their difficulties on the job.

"Most of the time they only listen to what their bosses are saying," he says. "Bosses need to come down to the employee level more and see what actually goes on, versus what their paperwork tells them is happening in the stores."

"It is two-way responsibility," she says. "Workers also have to figure out what they should be doing to be the most engaged in their jobs and the most productive."