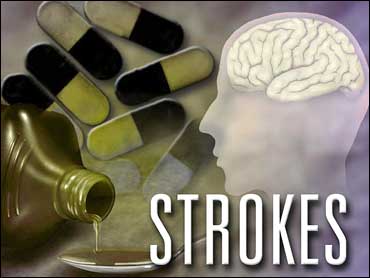 Some 780,000 people in the United States will have a stroke this year. It's the third-leading cause of death in the country, behind heart disease and cancer.

But a government study finds that a shockingly small number of people can recognize the signs that they are having a stroke.

So, on The Early Show Saturday, medical contributor Dr. Mallika Marshall offered potentially life-saving tips on how to recognize a stroke, and what to do if you think you or someone else may be having one.

Marshall explained that the federal Centers for Disease Control and Prevention analyzed data from a telephone survey of more than 71,000 people in 13 states and the District of Columbia. Only about 16 percent of those responding correctly recognized the five main stroke warning signs, knew to call 911, and could identify symptoms that are not indicative of stroke.

As a result, Marshall says, federal health officials want to significantly raise the country's stroke awareness by the year 2010.

The first of the five primary stroke symptoms, Marshall says, is sudden weakness or numbness of the arms, legs or face, especially on one side. It is, she says, a classic sign of stroke and, fortunately, one that many people do recognize.

Next is sudden vision problems in one or both eyes. That one, Marshall points out, isn't as obvious for some people. But sometimes the only symptom a stroke victim may have is sudden blurry vision or vision loss. It requires immediate attention.

The third sign is sudden dizziness, loss of balance or coordination, or difficulty walking. If you start experiencing any of them, you should think, "Could this be a stroke?"

Fourth on the symptom list is sudden confusion or trouble speaking. If someone is acting normally one moment and then starts to slur his or her speech or seems confused, is making up words or speaking gobbely-gook, get them evaluated immediately.

The fifth and final main sign of a possible stroke is a sudden severe headache with no known cause. If you have a history of headaches and you have one that's typical for you, it's probably not a stroke. But if you develop a bad headache that you've never had before, think: "Could this be a stroke?"

If you or someone you knows develops ANY of these symptoms, even if they have just one, call 911 immediately, Marshall stressed. Don't put the person in a car and try to drive to an emergency room. Don't call their physician to get advice over the phone. Drop everything and call 911.

For the most common type of stroke, one caused by a blood clot in an artery in the brain, you have up to three hours from the onset of symptoms to give that person clot-busting drugs. If someone has a stroke in which they bleed or hemorrhage in the brain, they may require emergency surgery to have the best chance at survival and recovery.

People should also be aware of "TIA," which stands for transient ischemic attack. Some people call it a mini-stroke. Basically, you develop the symptoms of a stroke, but they resolve themselves after a short period of time. That happens when a blood clot blocks a blood vessel, but then blood starts to flow again. A TIA should be taken seriously, because it means you're likely to have a stroke in the future. So, again, you need to call 911.

How can you tell if any of these symptoms are from a stroke or something else - a migraine, for instance?

Often, Marshall emphasized, you don't. With stroke, the onset of the symptom is usually sudden or out of the blue. You can get many of these symptoms from a whole host of other conditions, such as diabetes, high blood pressure, inner-ear infections, and so on. But the point is, they could also mean stroke.

And, since time is of the essence with stroke, don't waste time trying to figure out what's going on. Call 911 and let the doctors do that for you.

May is National Stroke Awareness Month. You can get more information about strokes at the Web site of the Centers for Disease Control and Prevention, and at the Stroke Health Center at WebMD.com.