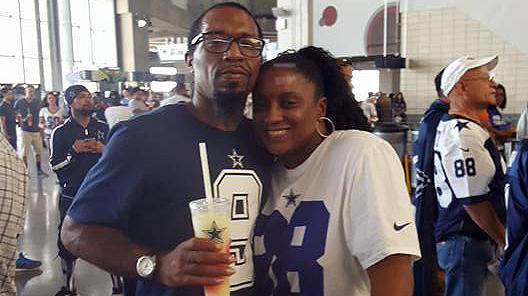 DALLAS – Detectives in Dallas are looking for a car they say was seen on surveillance video of an apparent drive-by shooting, reports CBS Dallas / Fort Worth.

The seven-second video shows the vehicle driving on July 15, 2017 near the scene where 39-year-old Traytonio King was killed. Near the upper right corner of the footage, the car can be seen slowing down near a group of men. The bright flashes of gunfire can then be seen as at least one person shot out the passenger side, sending the men scrambling.

Police responded at about 10:00 p.m. and found King suffering from a gunshot wound. King's wife, Shun, said other bystanders fled insted of helping her husband.

"There were several individuals standing outside, along with my husband, and a car drove by and started shooting. And they left my husband there. They left him there," she said.

The father of three died at a local hospital from his injuries. He had celebrated his birthday with family just two weeks before.

Shun King and the victim's mother, Evelyn, insist he was not the intended target.

Traytonio and Shun King recently moved after living with family and working hard to scrape together enough savings to get a home of their own, Shun King said.

"He made sure our dream came true," said Shun King "We didn't even get a chance to spend our first holiday in this house together."