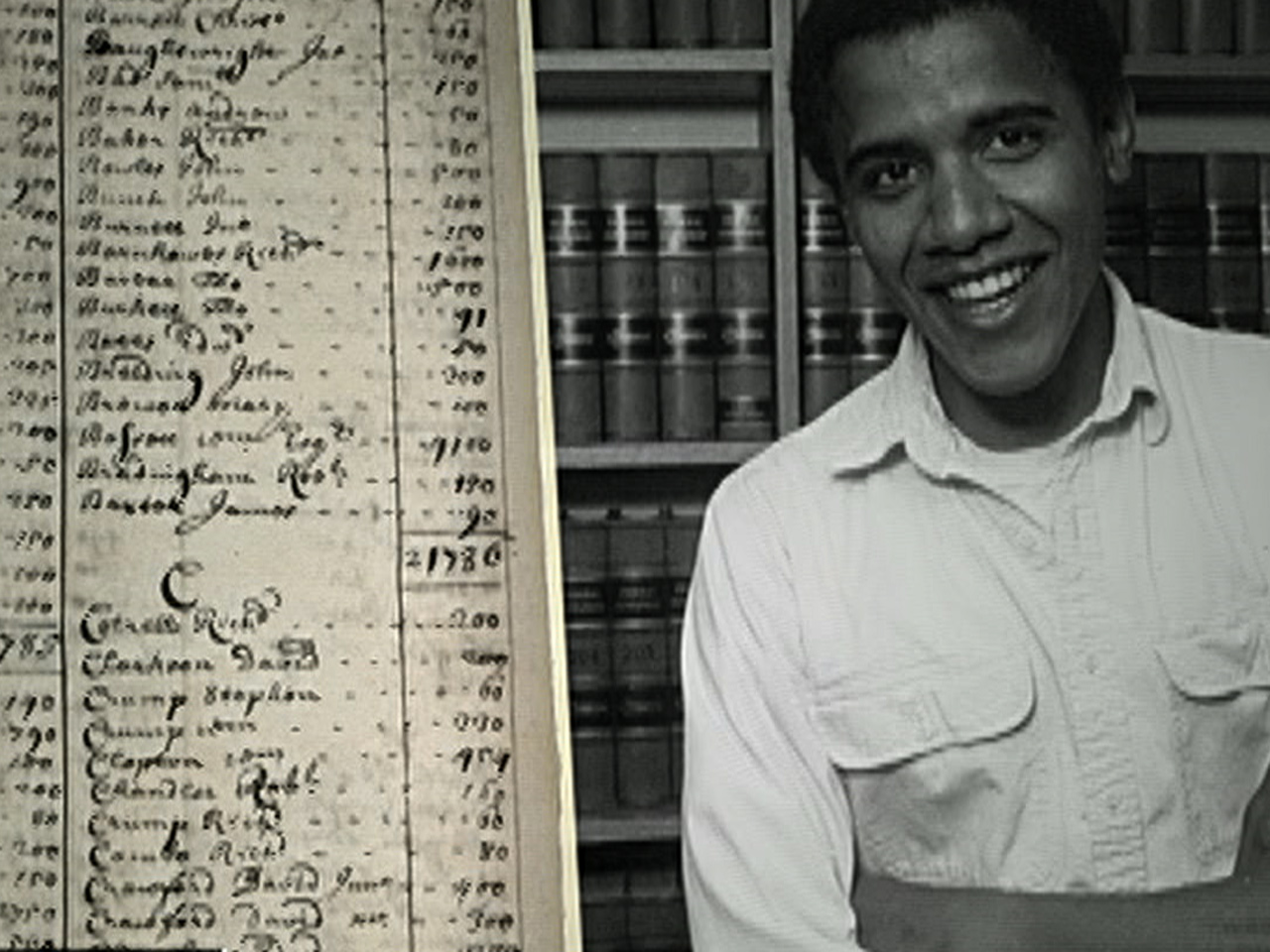 (CBS News) WASHINGTON -- It's no secret that President Obama comes from a very diverse background.

The surprising connection goes all the way back to the earliest days of colonial America.

It's already been learned that Mr. Obama is related, however distantly, to people as diverse as Warren Buffett, Sarah Palin, Rush Limbaugh and George W. Bush.

Now, researchers at Ancestry.com have discovered a startling new connection in his mother's family tree.

The president's diverse roots are widely known to range from Kenya to Kansas, but researchers have found a new link.

"President Obama is the 11th great-grandson of John Punch, who was the first documented African to be enslaved for life in the American colonies," says Joseph Shumway, a genealogist at Ancestry.com.

He says the president's white mother is a direct descendant of the first known slave in the American colonies through a family by the name of Bunch.

"We found that, through DNA testing done by members of the Bunch family, that their direct ancestors are of sub-Saharan African origin. ... Eventually, we were able to make a connection with the earliest Bunch family members and a gentleman by the name of John Punch," Shumway notes.

In 1640, John Punch, an African, was a servant in Virginia who escaped, was caught and sentenced to remain in bondage to his master for life.

As for the difference in the names - Punch with a "P" as opposed to Bunch with a "B" - researchers say that's not unusual, that early record-keepers wrote names as they sounded.

Though records are incomplete, the Ancestry.com genealogists say the slave John Punch is the only likely person to have been the father of John Bunch, sometime before 1637.

John Bunch's mother was white, and so was his wife, which means President Obama descends from the first known black and white couple who left traceable descendants.

"We're extremely confident in the conclusion that we've reached," Shumway says, adding that, "At the time, in the early 1600s, the racial attitudes in colonial Virginia were quite a bite different than they later came to be. ... (Inter)-racial marriage wasn't as looked down upon until about the 1660s and on upwards. (Only) into the early 1700s did laws (come into being) to prevent that from happening.

" ... The bunch family over the generations continued to intermarry with white people and just became white for all intents and purposes."

The first John Bunch in Ancestry.com's Obama family tree is the first in a seven-generation line of Bunches, originally in Virginia, moving to Tennessee, Arkansas and finally to Kansas, where President Obama's great-grandmother, Leona McCurry, his grandmother, Madelyn Payne, and his mother, Stanley Ann Dunham, were born.

Race is a subject the president has dealt with all his life, and never more urgently than when he broke with his former pastor, Rev. Jeremiah Wright, in 2008 over Wright's divisive racial views.

In a critical speech while running for president in March 2008, Mr. Obama declared, "I am the son of a black man from Kenya and a white woman from Kansas. ... The issues that have surfaced over the last few weeks reflect the complexities of race in this country that we've never really worked through."

David Maraniss, author of a new Obama biography, did extensive research into the Obama family for his book, "Barack Obama: The Story."

"At that point, it included Luo, the tribal clan of the Obamas, and English and Welsh and Irish and Scottish and German from the white side of his family. And now we're discovering something more!"

Maraniss, who traveled to Kenya and Indonesia in search of the influences that shaped Barack Obama, says the president's diverse roots make him hard to categorize.

"Because of the color of his skin and his father's background, he was African-American," Maraniss points out. "But culturally, he was not. He had to learn it. ... He's never been easy to pigeonhole. That's part of the attraction and mystery of Barack Obama."

The Ancestry.com team did two years of research to puzzle this out and looked through thousands of pages of colonial records. The researchers got the DNA from the Bunch family and, even without the documented connection to John Punch, they say they're very certain of their finding about the president's slave ancestor on mother's side.