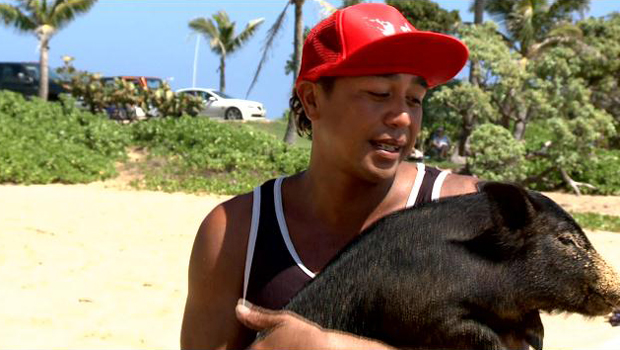 HONOLULU -- Sometimes someone just walks into your life.

Kai Holt told CBS Honolulu affiliate KGMB-TV he was camping with his family on a beach a few months ago when a little piglet walked into his cabana.

Holt named the pig Kamapua'a. A few weeks later they were walking around his backyard pool when Kama fell in.

"I had no idea that pigs could swim," Holt said.

Turns out Kama loves the water. Soon enough, they were heading to Sandy Beach and Kama was jumping on Holt's standup paddle board.

"I think he enjoys it, you know," said Holt. "He really gets off on it. It seems like he's having a good time when he's out there. I think it makes him happy."

Little Kama is not the first pig to hang two hooves. A YouTube search turned up a pig in New Zealand who also catches waves. But he's riding what surfers call "ankle slappers."

Out at Full Point, Kama charges much bigger waves. And he survives some serious wipeouts.

"It's funny when there's this big wave and there's a bump coming, and he launches into the air," said Holt's son, Braiden. "I think he's going to drown, but he just pops right up out of the foam."

On the beach, dogs appear jealous, and people gawk in amazement. Some take pictures to prove it to their friends.

"You know, surfing is Hawaii's gift to the world," said Holt. "It's like true happiness, you know, and that's what this guy does. Everywhere he goes he makes people smile and laugh. He just brings joy to the world."

Holt and Kama have such a bond they go everywhere together. They sleep in the same bed. Holt has him on a vegetarian diet to keep him from getting too big, say, 150 pounds.

"Hopefully Costco makes a bigger board," said Holt. "We're going to need a 12-0 (12-foot-long board) in about three months."

Yep, Kama's future looks bright. He's even sponsored. He gets free boards from Costco and a GoPro camera, and he has his own Instagram account. (Kamapuaa808)

Holt said "as long as he lives, he's not going to see the dinner plate, that's for sure. He won't see the inside of an emu."