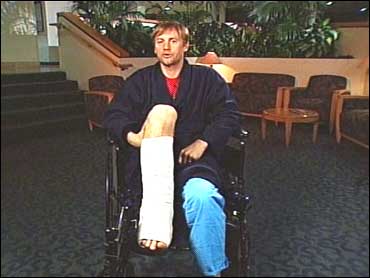 Brian Anderson fought off a 10-foot Great White shark while surfing off the coast of Oregon on Saturday. He tells The Early Show co-anchor Harry Smith how he survived the vicious attack.

"There was a lot of guys out surfing earlier. And a lot of the guys had gone
in by this time. And I'm kind of outside, the only one outside. Then my friend, George, was kind of on the inside of me and another friend of mine, John Gardner, was just getting out on the rocks so there was only two of us at this time. As I was waiting outside I just felt this shark thing grab my leg and it just happened in a split second," he recalls.

As he turned around, Anderson, 30, says he came face to face with the shark.

"I was holding my board in the left hand and with my right hand the nose of the shark came up in my face. I was able to punch it in the nose and that made it let go," he remembers.

"It was grabbing me," he says. "And as a surfer, you kind of go over those things. What if I got attacked by a shark, what would I do? They usually tell you to hit it in the nose and the eyes."

Anderson says the whole ordeal was surreal. "Early this morning I was just sleeping in bed and going over and over and it just doesn't seem real. And just punching that thing, I felt its rubbery feeling of the shark. And I could see the little black dots on its nose just really up close. It was just crazy."

The shark took a chunk out of Anderson's leg and he needed 70 stitches for lacerations he suffered to his calf and ankle.

After fighting off the shark, Anderson says he was not sure if he might be attacked again.

"That was the pretty terrifying part paddling back in because you really don't know where it is or you can't tell what it's doing," he says. "You just want to get back on the beach as fast as possible. And my foot was just kind of a numb ball back behind me. And I just wanted to get into shore and control my bleeding and just make it out alive."

Once on the beach, his friends struggled to carry him back 300 yards to the parking lot.

"They tried carrying me on a pallet and the pallet broke. Finally I was on the shoulders of those guys and I told my friend to grab where the bite mark was, where the bleeding was. He held my leg and kept it from bleeding. We made it back and the ambulance finally showed up. I was just trying to keep myself from passing out," he remembers.

What are his thoughts of having survived a shark attack?

"I had an angel watching out over me, for sure," he says.