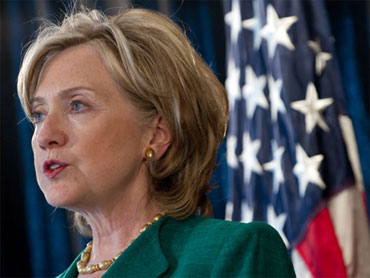 The U.S. Supreme Court said Monday it will not hear arguments that Hillary Rodham Clinton is ineligible to be secretary of state because of an obscure rule about pay increases.

The high court on Monday refused to hear an appeal by Judicial Watch, a conservative watchdog group, without ruling on the underlying issue.

Judicial Watch's lawsuit had been thrown out by the lower courts without a "final judgment, decree or order upon the validity of the appointment and continuance in office of the Secretary of State," the high court said. "... The appeal is therefore dismissed for want of jurisdiction."

The suit is based on a largely overlooked section of the U.S. Constitution on compensation for public officials, the emoluments clause. The clause says no member of Congress can be appointed to a government post if that job's pay was increased during the lawmaker's current term.

Clinton was serving at New York senator when Congress raised the secretary of state's salary to its current level of $191,300. So that Clinton could take the post, Congress lowered the salary to $186,600, the level when she began her second Senate term. A similar tactic has been used so that several other members of Congress from both parties could serve in the Cabinet.

Judicial Watch, which has pursued several suits against Clinton and other officials over the years, argues there can be no exceptions to the clause.

The group says that Hillary Clinton is "constitutionally ineligible" to be secretary of state until 2013, when her second Senate term would have expired. Nominated by President Barack Obama, she resigned from the Senate to take the Cabinet post.

Judicial Watch filed the suit on behalf of State Department employee David Rodearmel. It says Rodearmel would violate the oath he took as a foreign service officer in 1991 to "support and defend" and "bear true faith and allegiance" to the Constitution by working for Clinton.