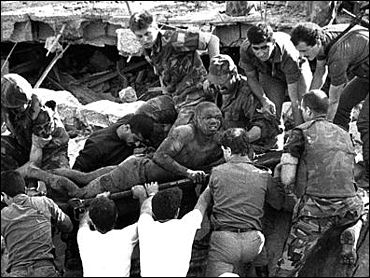 The court on Wednesday ruled 6-2 in favor of more than 1,300 relatives of the 241 U.S. service members who died in the Beirut bombing and victims of other attacks that courts have linked to Iran.

Justice Ruth Bader Ginsburg wrote the opinion for the court rejecting efforts by Iran's central bank to try to stave off court orders that would allow the relatives to be paid for their losses.

The law, Ginsburg wrote, "does not transgress restraints placed on Congress and the president by the Constitution."

Chief Justice John Roberts and Justice Sonia Sotomayor dissented. "The authority of the political branches is sufficient; they have no need to seize ours," Roberts wrote.

The decision comes as controversy swirls over pending legislation in Congress that would allow families of the Sept. 11 attacks to hold the government of Saudi Arabia liable in U.S. court. The Obama administration opposes the bill. President Barack Obama met with King Salman in Riyadh Wednesday at the start of a brief trip to the country.

Congress has repeatedly changed the law in the past 20 years to make it easier for victims to sue over state-sponsored terrorism; federal courts have ruled for the victims. But Iran has refused to comply with the judgments, leading lawyers to hunt for Iranian assets in the United States.

The plaintiffs in the lawsuit included relatives of the victims of the Marine barracks bombing in Beirut, the 1996 terrorist bombing of the Khobar Towers in Saudi Arabia which killed 19 service members, and other attacks that were carried out by groups with links to Iran. The lead plaintiff is Deborah Peterson, whose brother, Lance Cpl. James C. Knipple, was killed in Beirut.

Liberal Democrats and conservative Republicans in Congress, as well as the Obama administration, supported the families in the case.