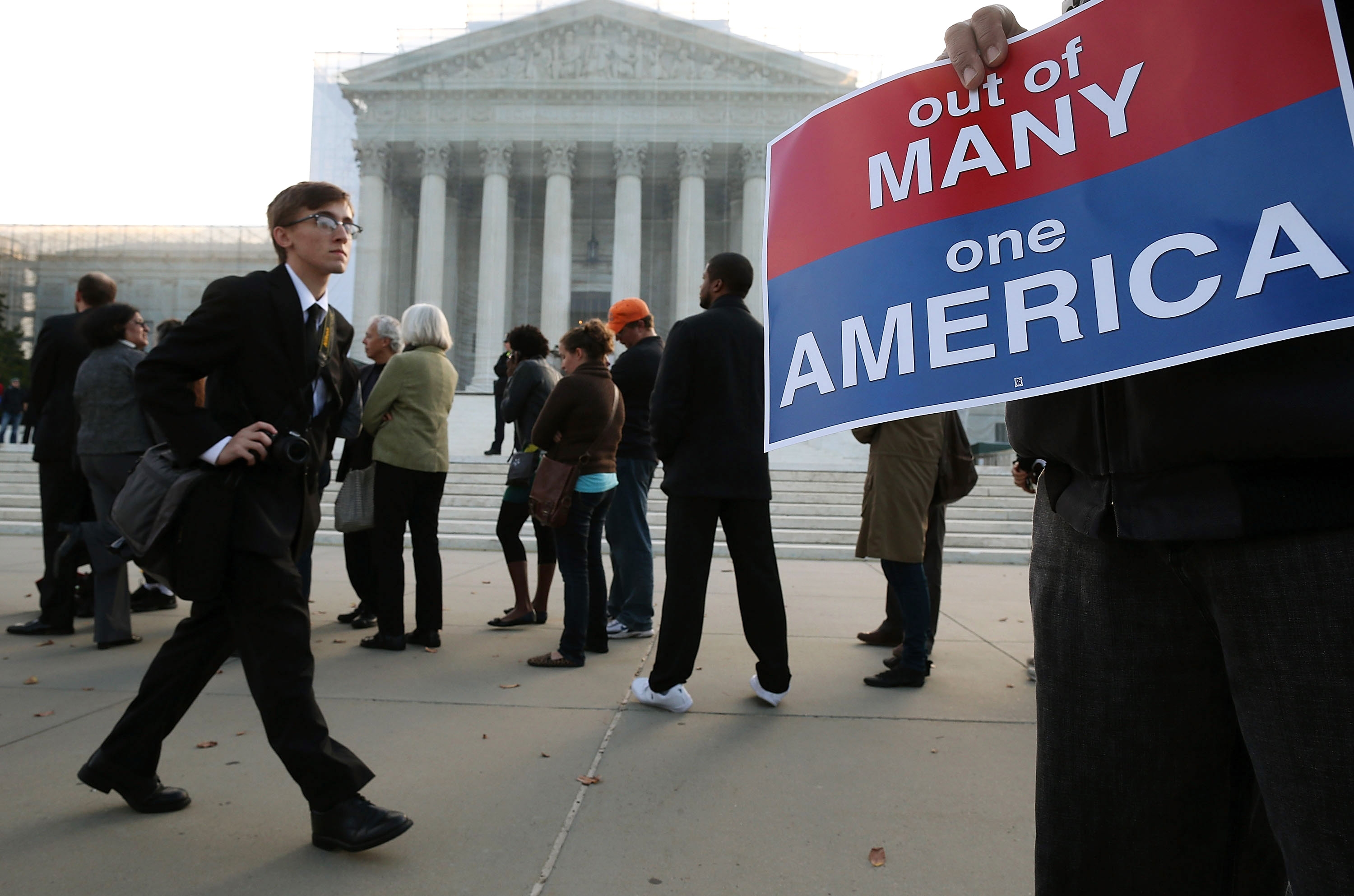 Affirmative action is rarely discussed on the campaign trail, but it nevertheless is a matter of heated debate in Washington this year.

The Supreme Court today will hear an hour of arguments in the case of Fisher v. University of Texas at Austin, which asks the court to rule on whether the university's consideration of race in admissions is constitutional. Abigail Fisher, a 22-year-old white woman who was rejected from UT Austin in 2008, has filed suit against the school, arguing its consideration of race doesn't meet standards previously set by the high court. If the court rules against the university, it could potentially change the way schools across the nation talk about race.

The response to Fisher's case proves that while affirmative action has been a matter of debate for decades, it remains a potent one. Dozens of individuals and organizations have given their input to the Supreme Court through amicus briefs -- 17 briefs filed to support Fisher and 73 in support of the university.

Republican Rep. Allen West, Ronald Reagan's attorney general Ed Meese and the libertarian Cato Institute all signed onto briefs backing Fisher. On the other side, the court is hearing from the likes of Democratic Senate leaders Harry Reid and Chuck Schumer, Teach for America and the American Psychological Association. Dozens of organizations in favor of the school's system plan on holding a rally outside of the Supreme Court today.

The Supreme Court set a precedent for the use of affirmative action in college admissions in 2003, when in Grutter v. Bollinger it rejected the use of racial quotas but said that schools could consider race as part of a "holistic" review of a student's application. In 2003, however, Justice Sandra Day O'Connor was the swing vote in favor of the "holistic" approach. This year, the court's balance is tipped towards conservatives.

CUNY School of Law Prof. Ruthann Robson, who has followed Fisher at the Constitutional Law Prof Blog, told CBSNews.com that overruling Grutter would be a drastic move, politically speaking. By picking apart UT Austin's system, however, the court "could eviscerate Grutter without overruling it," she said.

If the court gave a critical ruling against UT Austin's system -- which already strives to consider race as a part of the "holistic" picture -- other schools would be hard pressed to defend their own consideration of race. Abigail Fisher wants college admissions to be "completely race neutral and race blind," Robson explained.

The University of Texas argues that a diverse student body is an indispensable part of training future leaders with "invaluable educational benefits." It argues that its admissions process meets the standards the court set in Grutter and other cases.

"Race is only one modest factor among many others weighed; it is considered only in an individualized and contextual way... and admissions officers do not know an applicant's race when they decide [who] to admit in UT's process," the university's court brief reads. "It is undisputed that UT has not established any race-based target; race is not assigned any automatic value; and the racial or ethnic composition of admits is not monitored during the admissions cycle."

Fisher, meanwhile, argues in her brief that UT Austin's attempts at racial diversity aren't focused on building a rich learning environment, but are "purely representational" -- in other words, the school is focused on achieving demographics that mirror state demographics. Additionally, her lawyers argue the school goes too far by striving for classroom diversity in addition to diversity among the entire student body. Classroom diversity can only be achieved, they argue, if race is a "dominant" factor in admissions.

Even so, Fisher's lawyers argue affirmative action has had a "negligible" impact on the school.

Most students -- 70 to 80 percent of those in-state students admitted -- are accepted to UT Austin through the "Top 10 percent" law, which grants automatic admission to the top students in every Texas high school. Race isn't considered in the "Top 10" program. In 2008, just 216 accepted students accepted outside of the "Top 10" program were black or Hispanic -- and many of those students would have been admitted without consideration of race, Fisher's lawyers note. As for Fisher, she did not qualify for the program.

While she didn't get into her school of choice, Fisher did graduate from Louisiana State University and now works as a financial analyst in Austin, the New York Times reports.

It's possible, Robson told CBSNews.com, that the court may decide to simply let lower court rulings in favor of the university stand. Robson said that there are legitimate questions about whether the case even deserves to be heard by the Supreme Court but that the court may have been influenced by the views of Fifth Circuit Court Judge Edith Jones. An influential conservative, Jones argued that Fisher's case deserved consideration.

It's also possible the court could end up with a split decision, four to four. That's because Justice Elena Kagan has recused herself from the case, likely because of the high-level federal role she held while the case was moving through lower courts.

If the court splits, it would let the university system stand without setting any kind of precedent. The implications of that outcome would depend on what the written opinions say, but interested parties would also have to consider Kagan's role in future cases.