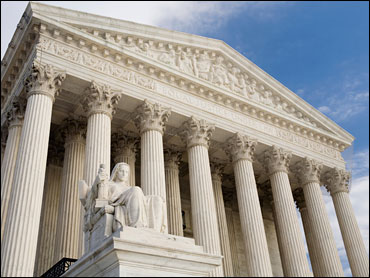 The U.S. Supreme Court today reversed a lower court ruling, throwing out a tax imposed by an Alaskan city on oil-carrying cargo ships using its port, deciding it was unconstitutional.

Justice Stephen Breyer wrote that the tax, based on the tonnage of cargo carriers, was levied without the consent of Congress and therefore unconstitutional. Justices John Paul Stevens and David Souter dissented.

The Court also affirmed the "lifetime banishment" of an alien convicted of wire, bank and mail fraud and money laundering, clarifying the procedures by which an immigration judge would use a felony conviction to instigate deportation, in the case of Nijhawan v. Holder (08-495).

The Supreme Court continued to clear its slate of rulings expected before the beginning of its summer recess. There are 14 opinions due, with more decisions expected to be released on Thursday.

Looking ahead, the Court said it will decide whether student loans can be dismissed through bankruptcy with just a notice to the collector instead of a hearing proving that paying the money back would cause an "undue hardship."

USA Funds, which said Espinoza owed $17,832, did not object to his bankruptcy plan, which was finalized in 1994. But Six years later, Espinosa's income tax refund was taken to pay off the rest of the debt.

USA Funds said the bankruptcy agreement is void because Espinosa never proved in court that paying the full amount would cause him undue hardship.

Espinosa says the bankruptcy agreement is final and the company cannot go back on it now. The 9th U.S. Circuit Court of Appeals in San Francisco agreed, saying the time to object was before the bankruptcy was completed.

CBS News legal analyst Andrew Cohen remarks that this is a timely issue given the economic downturn and rising default rates. "The bad news is that the decision won't come for at least another eight months or so.' He said.

The Court will also consider putting limits on a state's authority to restore beaches eroded by storms, when such work affects the boundary lines of private landowners (Stop the Beach Renourishment v. Florida, 08-1151), and rule on cases involving the loss or non-renewal of a business franchise (a consolidation of Mac's Shell v. Shell Oil, 08-240, and Shell Oil v. Mac's Shell, 08-372), and arbitration (Stolt-Nielsen S.A., et al., v. Animalfeeds International Corp., 08-1198).

In addition, the Court turned down a review of the convictions of five Cuban intelligence agents who say they did not receive a fair trial because of strong anti-Castro sentiment in Miami.

The justices, acting Monday, are leaving in place the convictions of the so-called "Cuban Five," despite calls from Nobel Prize winners and international legal groups to review the case.

The five - Ruben Campa, Rene Gonzalez, Gerardo Hernandez, Luis Medina and Antonio Guerrero - were convicted on charges of acting as unregistered Cuban agents in the United States and of espionage conspiracy for attempting to penetrate U.S. military bases.

"The Court apparently didn't think much of the claims by the defendants that anti-Castro sentiment, and not evidence, led to their convictions," said Cohen. "A lot of people were following this case but it was never really a close call, never really a great possibility that the Justices would ride to the rescue."