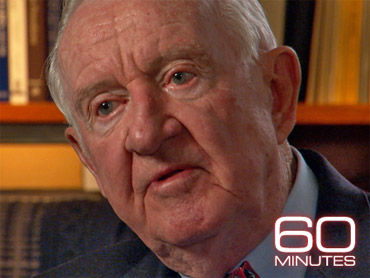 Justice John Paul Stevens has shaped more American history than any Supreme Court justice alive. And for most of his 35 years on the court, he followed the usual tradition: declining to talk about his cases in interviews.

As he prepared to retire, "60 Minutes" and correspondent Scott Pelley hoped he would overrule that custom and talk with us about the decisions that have changed our times.

It was Stevens who forced a showdown with President Bush over the prisoners at Guantanamo Bay, and Stevens who tried to stop the court from deciding the presidential election of 2000.

At the end of his last term, Justice Stevens ruled on our request and, in a series of interviews, opened a rare window into the nation's highest court.

We met Stevens at the Supreme Court this past summer as he prepared to retire at the age of 90. He was appointed by President Ford, but as a moderate Republican he ultimately became the leader of the court's liberal wing.

With nearly 35 years at the court, he is the third longest serving justice ever, and with history like that it's hard to know where to start.

But we picked the landmark case of 2000, which he thinks is one of the court's greatest blunders.

When asked what the court should have done with Bush v. Gore, Stevens told Pelley, "It should've denied the stay, period."

"And therefore let the recount go on in Florida?" Pelley asked.

Bush versus Gore: a month after Election Day, Florida was recounting ballots; Bush was ahead, but the recount might go either way.

So the Bush campaign asked the court for a stay, to stop the recount, on the grounds that the recount would cause irreparable harm to the nation. The night before the court heard the request, Stevens ran into another justice at a party.

"And I remember both of us saying to one another, 'Well, I guess we're gonna have to meet tomorrow on this, but that'll take us about ten minutes,' because it had obviously no merit to it. Because in order to get a stay in any situation, the applicant has to prove irreparable injury and there just obviously wasn't any irreparable injury to allowing a recount to go through because the worst that happens is you get a more accurate count of the votes. But much to our surprise, on the next day, the majority did decide to grant a stay," Stevens remembered.

Ultimately, the majority ruled that the recount wouldn't be fair because recount procedures were inconsistent across the state and couldn't be fixed before Florida's deadline.

"There were many people in this country who felt that the Supreme Court stole that election for President Bush. That was the accusation that was made," Pelley pointed out.

"It's unfortunate that that kind of accusation was made and that's one of the consequences of the decision that I think made it an unwise decision for the court to get involved in that particular issue," Stevens said.

Asked if the court's decision was a partisan one, Stevens said, "I wouldn't really say that. I don't question the good faith of the people, the justices with whom I disagreed. But I think they were profoundly wrong."

Between interviews, Stevens slipped the "60 Minutes" team into places the public never sees. In his chambers, we saw a shrine to the legends of Chicago sports and a picture of him swearing in the vice president.

It turned out he was wearing the same suit seen in the picture and he still had the oath in his pocket. "In fact, I didn't plan to bring this with me," Stevens said.

In a sense, Stevens was born into a world of crime and justice, the Chicago of the 1920s. He was a rich kid; his father built the largest hotel in the world. But it was the time of Al Capone and when Stevens was living in Chicago at the age of 12, gangsters came in and robbed the family at gunpoint.

"And we were all lined up and they threatened to kill, to shoot everybody with a sub-machine gun," he remembered.

As they faced a machine gun, a neighbor just happened to come to the door and the men fled.

The age of 12 was eventful: his father lost his wealth in the Depression and then the cops came for him.

"Your father was arrested for allegedly embezzling money from the family insurance business and using it to support the hotel. What was it like for you as a boy 12 years old when your father was convicted?" Pelley asked.

"I never really thought he'd spend any time in jail because I knew the kind of man he was," Stevens replied.

That's when Stevens, at an early age, saw how a judge could change the world. On appeal, the Illinois Supreme Court ruled that there was no credible evidence against his father.

"Did seeing your father wrongly convicted and then exonerated influence you as a judge at all?" Pelley asked.

"It may well have because it was an example of the system not working properly. And so I think every judge has to keep in mind the possibility that the system has not worked correctly in a particular case," Stevens explained.

He drew on that lesson 70 years later in the war on terror, in a series of cases that are seen as among the most important of his career.

The Bush administration said prisoners at Guantanamo Bay, Cuba, had no right to lawyers or courts because they were held outside the U.S. But Stevens led a court majority that ruled that the U.S. naval base there was essentially American territory, so the prisoners did have legal rights.

"There is one inscription, and one inscription only, above the door to this building," Pelley remarked, referring to the words "Equal Justice Under Law" inscribed on the façade of the Supreme Court. "And that applies to foreign nationals who may wish to do this country harm?"

"If they're to be prosecuted for crimes, they're entitled to a fair trial or fair procedures," Stevens argued.

In another terror case, the stakes were much higher because the suspect, Jose Padilla, was an American citizen. He was arrested in the U.S. on suspicion of terrorist ties and put into a military brig for nearly four years without charges. He was held incommunicado, on nothing but the order of the president.

"I thought that very possibility is a potential threat to every citizen in the United States, if you can be subjected to that kind of detention without access to courts or lawyers or the rest it is a matter to be very concerned about," Stevens said.

The court majority dismissed Padilla's appeal on a technicality, but Stevens and three other justices had wanted to rule on Padilla's detention. Stevens aimed his dissent at the Bush administration, writing "If this nation is to remain true to the ideals symbolized by its flag it must not wield the tools of tyrants…."

"John Stevens plays by the rules, but he knows how to throw a punch," Justice David Souter told Pelley.

Souter retired from the court in 2009. He was often an ally of Stevens on the liberal wing and he sided with Stevens in the Guantanamo and Padilla cases.

Asked how important that was, Souter told Pelley, "It's as fundamental as any decision that's been made that I can think of on a citizen's liberty in my lifetime."

"And it was Justice Stevens who stood up and said, 'Wait a minute. This has gone too far,'" Pelley remarked.

"That's what you got courts for. He was earning his salary," Souter replied.

"He rendered a service to the country in those opinions?" Pelley asked.

"Yeah. That made him one of the great judges," Souter said.

"I would imagine that the majority of the American people would probably disagree with you on these opinions," Pelley told Stevens.

"That may very well be true," he replied. "You know it's a part of our job to write opinions from time to time that are not popular and you know at the time they're not going to be popular."

Stevens took us on a tour of the hidden Supreme Court. There is a library that's usually open only to lawyers; it's not used much now that there's Internet. And he gave us rare access to the justices' "robing" room.

It's in the robing room that all nine justices slip into their gear and, by tradition, shake hands at the start of the new term. We were with Stevens in June as he was preparing to hang up his robe for the last time and it was then that he told us he was worried about the direction of the court.

The Supreme Court is supposed to uphold the Constitution, but throughout its history there has always been tension when justices appear to rewrite laws that Congress was elected to write.

It is called "legislating from the bench." Stevens says one of the worst examples came this year in a case called "Citizens United." The court majority overturned 100 years of law that limited corporate money in politics.

Stevens told Pelley he thought the court had legislated from the bench.

In Citizens United, the majority gave corporations the right to spend as much as they want on political campaigns; the majority said that limiting money in politics is the same as limiting free speech.

"Where does the court make a mistake, in your view?" Pelley asked.

"Well which mistake do I want to emphasize?" Stevens asked.

"Well, you know, basically, an election is a debate. And most debates, you have rules. And I think Congress is the one that ought to make those rules. And if the debate is distorted by having one side have so much greater resources than the other, that, sometimes may distort the ability to decide the debate on the merits. You want to be sure that it's a fair fight," Stevens explained.

In Citizens United, Stevens' opinion was a warning to the court: the decision, he wrote, "Will, I fear, do damage to this institution."

In our time with Stevens we expected to cover momentous events, but, in his chambers, we didn't imagine we would get a ruling on one of the greatest controversies in baseball.

We noticed a box score from Game 3 of the 1932 World Series. Legend has it that the Yankees' Babe Ruth pointed to a spot in the Cubs' Wrigley Field and nailed a homerun right there - it's the famous "called shot," but whether it actually happened is ferociously debated.

Remember the fateful year when Stevens was 12? Well, he was here when Ruth came to bat. And we figured it was a question of suitable national importance on which to render this justice's final ruling.

"He took the bat in his right hand and pointed it right at the center field stands and then, of course, the next pitch he hit a homerun in center field and there's no doubt about the fact that he did point before he hit the ball," Stevens recalled.

Stevens said, "That's the one ruling I will not be reversed on!"

Now Available: America's number one news program now has a companion iPad app! The "60 Minutes" iPad app features the same hard-hitting investigative reports, interviews, feature segments and profiles of people in the news that are the hallmark of the iconic broadcast show, plus original video content from "60 Minutes Overtime." Check it out in the iTunes app store.

A medication for obesity