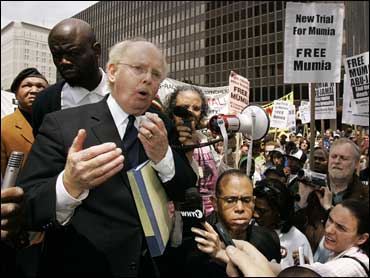 The 3rd U.S. Circuit Court of Appeals is weighing three issues in the case: whether the trial judge was racially biased, whether the judge erred in instructing jurors on the death penalty, and whether the prosecution preferred white jurors to black jurors.

In court, the appellate judges pressed attorneys on both sides about the question of whether blacks had been intentionally kept off the jury that convicted Abu-Jamal a quarter century ago and sentenced him to death.

Abu-Jamal's attorneys argue that they were, but both sides agree there is no record from the 150-person jury pool to prove it one way or the other.

"I don't know how we could get it," Abu-Jamal attorney Robert R. Bryan told the court.

Philadelphia prosecutors say the evidence against Abu-Jamal is overwhelming.

Abu-Jamal, 53, a former radio reporter and member of the now-defunct black civil right militant group who has built a global following while in prison through his politically charged writings and recorded speeches, was convicted of shooting Philadelphia police officer Daniel Faulkner in 1981. The jury had 10 whites and two blacks.

Faulkner, who was white, had pulled over Abu-Jamal's brother in a traffic stop when Abu-Jamal, according to witnesses, ran to the scene from his nearby taxi and shot the 26-year-old officer repeatedly. Abu-Jamal was shot once, apparently by the downed patrolman.

His attorney is now challenging his conviction, while prosecutors are asking the appeals court to reinstate his death sentence. A federal judge threw out the death sentence in 2001, citing improper jury instructions, but upheld Abu-Jamal's conviction.

Actors, writers, death-penalty opponents and other activists have rallied behind his claim of innocence.

Outside the courthouse Thursday, Marcus Shell, 35, said Abu-Jamal didn't get a fair trial because of who he was: "a former Black Panther, the voice of the voiceless.

"Mumia represents a lot of blacks locked up in prison today," Shell said.