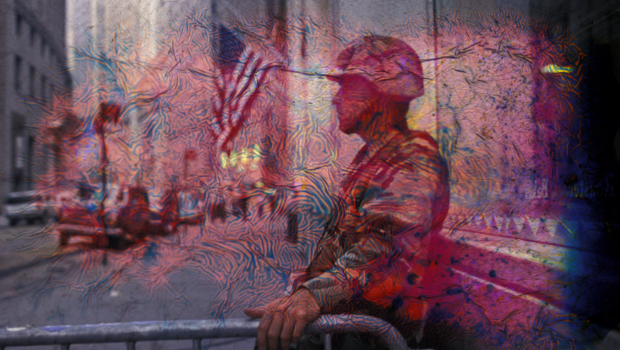 NEW YORK - When Randy Taylor talks about his photos, he can't help but tell you what they used to look like.

"This is a moose and you can see the antlers up here," he said.

Taylor was a documentary-style photographer who used to travel around the world. Over a 40-year career he had taken close to 30,000 images. Almost all of them were destroyed by Superstorm Sandy.


They were stored in a commercial storage facility, downstairs in the basement, he said.

"We had to rip open the filing cabinets," he said. "So we had crowbars and all the slides kind of floated from the water. Mold was killing the photographs."

To stop the mold on the few dozen images still intact, Taylor dipped them in rubbing alcohol. The effect was surreal – not detracting from the photos, but adding to them all.

"That's the magic of it," Taylor said. "All of these are better now than they were as the originals."

Surf boarders became eerie, post 9/11 images more somber. There was a neo-Nazi rally in Florida and a shootout in Paris that earned Taylor a Pulitzer Prize nomination.

"There was a roll of film," he said. "They were all destroyed except for one single frame."

What was saved was the central focus of the image.

"And the best frame," he said.

While Taylor stopped taking photos decades ago, these altered images are once again bringing him acclaim. They've been published in both Italy and France and he has offers to show them in New York City galleries.

What did he learn from this?

"I think that the lesson is that, events happen in life and we can't do anything about controlling the events, the only thing we can control is our reaction to the events," he said.

Taylor says his pictures are now a mix of photojournalism and art. They always told a great story. Now there's an even better one behind them.

CEO of Cerebral "confident" in company's practices despite DOJ investigation

Planned Parenthood CEO: Clinics "fighting to get every single patient in that they can see" before states ban abortion
Thanks for reading CBS NEWS.
Create your free account or log in
for more features.
View CBS News In
CBS News App Open
Chrome Safari Continue
Be the first to know
Get browser notifications for breaking news, live events, and exclusive reporting.