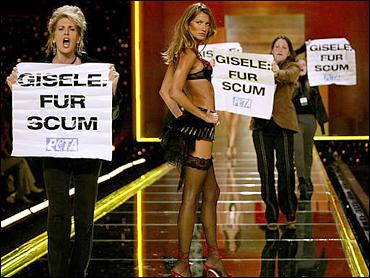 Animal rights protesters tried to steal the spotlight at the taping of the Victoria's Secret Fashion Show, storming the stage as scantily clad supermodel Gisele Bundchen strutted down the runway.

Carrying signs that said "Gisele: Fur Scum," four members of People for the Ethical Treatment of Animals ran on stage Thursday night. PETA has targeted Bundchen since she signed a modeling contract with Blackglama, a leading American fur company.

The protesters were led away by security guards and three of them received summonses for disorderly conduct, said a spokesman for the New York Police Department.

The entire runway segment was re-staged and re-taped. A Victoria's Secret spokesman declined to comment.

The Victoria's Secret Fashion Show draws a lot of attention each year for bringing the world's most famous faces and bodies to the airwaves. Other leading supermodels, including Heidi Klum and Tyra Banks, also headlined the show. This year's show, the 8th annual, is scheduled to air at 9 p.m. EST Wednesday on CBS.

Last year, the show came under fire when it aired on ABC. The National Organization for Women called it demeaning to women and the Parents Television Council said it was part of a trend of "crass and vulgar" TV programming.

A Federal Communications Commission member asked for an investigation into whether the show violated indecency regulations; in March, the FCC decided it did not.

The special drew 12.3 million viewers last year, finishing third in its time slot and doing marginally better than the show it replaced.

The lingerie maker, owned primarily by the Columbus, Ohio-based Limited Brands, paid to produce the fashion show for ABC and was responsible for buying most of the commercial time on the hour, either to use itself or sell to others.