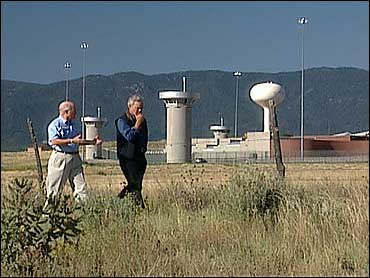 The president says he wants to close the prison at Guantanamo Bay, Cuba, early next year. But it's an open question where those prisoners would go. One possibility is a secretive installation in Colorado where more than 40 terrorists are already locked away. The government doesn't say much about this place called the United States Penitentiary Administrative Maximum, also known as "Supermax." The public had never seen the operation inside until 60 Minutes broadcast this story in 2007.

Since President Obama mentioned Supermax in a speech about Guantanamo, we wanted to take you there again. It's a sort of a 21st century Alcatraz, where convicted al Qaeda terrorists are force-fed and some guards worry about their own safety.

Supermax is the place America sends the prisoners it wants to punish the most - a place former warden Robert Hood described as a clean version of hell.

"I don't know what hell is, but I do know the assumption would be, for a free person, it's pretty close to it," Hood tells Pelley.

60 Minutes' cameras could only get near the perimeter of the prison. The ADX lies low and sprawling by the foothills of the Rockies, 100 miles south of Denver. There have been six wardens since it opened in 1994, but this is the first time one of them has described his experiences inside. Robert Hood ran the ADX from 2002 to 2005, at the end of 20 years in the Bureau of Prisons.

"When the Supermax job came up, you were excited about taking it. Why?" Pelley asks Hood.

"In our system, there's 114 prisons. And there's only one Supermax. It's like the Harvard of the system," Hood explains.

Except that the ivory towers of Harvard may be easier to get into. Supermax holds fewer than 500 prisoners. Most are at the facility because they're too violent to be anywhere else. But this is also where America keeps convicted terrorists, more than 40 of them.

"You think the guard towers are watching us?" Pelley asks Hood, while standing not far from the perimeter of the ADX.

"I know they're watching us," Hood says.

But the Bureau of Prisons doesn't want us watching them. The general public has never seen Supermax in operation, but 60 Minutes found rare, if poor quality, pictures in the files of a court case. The video, shot by prison staff, shows a new inmate, Lawrence Klaker, a member of a prison gang being brought in through the underground garage.

Most prisoners spend up to 23 hours a day in their cells, every minute, every meal. The window in their cell is blocked so they can't see the mountains. Inmates can watch a 12" black and white television or read books to pass the time. And if they behave, they may get limited exercise in a one-man recreation pen.

This was the life terrorist Richard Reid saw when he was brought into Supermax.

"We're escorting him down and his eyes are getting bigger and bigger. He's realizing, 'I'm in trouble,'" Hood says of Reid's arrival.

Shortly after 9/11, it was Reid who tried to blow up an airliner with a bomb in his shoe.

Hood says Reid didn't impress him. Asked if he thought Reid was a leader or a follower, Hood tells Pelley, "Definitely, in my opinion, a follower. I think he would jump off the top of the Empire State Building, if he thought it was for the right cause."

60 Minutes learned that Reid is in a special wing for terrorists called "H-unit." Others include Zacarias Moussaoui, who wanted to be one of the 9/11 hijackers, and Wadih El Hage, Osama bin Laden's former private secretary. Another terrorist in Supermax is Ramzi Yousef, the leader of the first World Trade Center attack in 1993.

What did Hood make of Yousef?

"The most interesting inmate in my career," Hood says. "I was surprised that he was extremely respectful. Prayed every, almost on the hour."

Yousef has lived in the ADX for 11 years, sacrificing to live by his own code. "Something as simple as recreating, he would have to be strip searched to go recreate. He chose not to do that because of his belief that it would be inappropriate for us to show his body, or see his body," Hood says.

"And so he stays in the cell?" Pelley asks.

"Never been out, to my knowledge," Hood says.

Eight years after Yousef's World Trade Center attack came 9/11, and the inmates saw it on the TVs in their cells.

"We had a lot of 'em jump up and down. You know, scream and yell and clap and they were very excited," remembers corrections officer Barbara Batulis, who spoke to 60 Minutes as head of the officer's union. She's the only current Supermax employee who would sit down for an interview.

"I'm curious about the Islamist extremists, the terrorists in the prison. As a group, what are they like? How do they behave?" Pelley asks.

"A lot of them behave self-righteously very needy. But me being a female I think that's part of me dealing with them also," Batulis says,

Asked what she means by "needy," Batulis tells Pelley, "They want more than what they have coming."

"They want extra toilet paper or extra paper, writing paper, or extra envelopes. And if you can't give 'em, they want to see a supervisor right then and there. And that doesn't always happen," she says.

There have been concessions to the Islamic terrorists. 60 Minutes got a hold of the commissary list and found prayer rugs on sale for $18 and a menu with no pork. But, still, they're ordered around by female guards and that really upsets them.

"A terrorist inmate threaten to kill my family, because I was doing my job," Batulis says.

"I wonder, do the corrections officers prefer to work elsewhere in the prison? Do they prefer to work with the gang-bangers and the murderers," Pelley asks.

Batulis says she can feel it. "It's very obvious. I mean, they just look at you with sheer disdain," she explains.

Turns out that sheer disdain doesn't end there: 60 Minutes has been told that there have been frequent hunger strikes among the Islamic terrorist inmates inside Supermax and to keep the inmates alive there are often force feedings. That's when an inmate is restrained and liquid nourishment is poured down a tube in his nose. We're told there have been about a dozen hunger strikers and one of them used to be Osama bin Laden's secretary.

Former Warden Robert Hood told us that he supervised many of these feedings. "I probably conducted, authorized, conducted 350, maybe 400 of involuntary feedings. Again, not…individuals, because you could have one person, three meals a day for, you know, two months. That adds up," he tells Pelley.

Bureau of Prisons' records that 60 Minutes has seen show there have been as many as 900 of what the bureau called "involuntary feedings" of terrorists in H-unit since 2001.

Why did the prisoners stop eating? What was the complaint?

Says Hood, "It was conditions of confinement."

Some of the conditions they object to are outlined in a document: inmates get letters only from people approved by the prison and they get one, monitored, phone call a month, for 15 minutes.

As strict as that seems, 60 Minutes has been told there is an even higher level of confinement, sort of an "ultramax" inside Supermax. It's a group of cells where there's virtually no human contact, not even with guards and there are only two prisoners are considered so dangerous that they're locked in this place that's known as "Range 13."

One of them is Tommy Silverstein, who killed a prison guard; the other is World Trade Center bomber Ramzi Yousef.

Warden Hood says Yousef is on Range 13 for just one reason. "He has that Charlie Manson look," Hood says. "He just has the eyes. He has some charisma about him. He's in uniform. But you know that there's a powerful person that you're looking at."

"You didn't want him in a place where he could give anybody any orders?" Pelley asks.

60 Minutes has been told something strange is happening with Yousef. He now insists that he has renounced Islam and converted to Christianity. He has even begun leaving his cell for exercise.

Warden Hood left before all this happened, but still he doesn't buy it. "He's playing a game with someone. If he's doing that, he's doin' it for the reaction," Hood says. "He's doing it for whatever. He is the real deal."

There are plenty of other real deals at Supermax -- they're the all-stars of infamy. There is unabomber Ted Kaczynski, Oklahoma City bombers Terry Nichols and Tim McVeigh, before McVeigh was executed, and Robert Hanssen, the FBI supervisor turned Soviet spy. Olympic Park bomber Eric Rudolph is also at ADX. So are the al Qaeda terrorists who bombed the U.S. embassies in Africa. Mob informant Sammy "The Bull" Gravano has also been at the facility.

Pelley wasn't allowed interviews with prisoners in Supermax, but 60 Minutes did find Garrett Linderman, an inmate who actually got out.

Linderman had been in another prison for robbery until his cellmate there was found stabbed to death. Linderman wasn't tried for the murder but they transferred him to the ADX or Supermax. He was released, robbed a bank, and 60 Minutes found him in a Washington State prison.

"How is the ADX different than other lockups you've been in?" Pelley asks.

"Your connections to the outside. Your family. Through phone calls, visits, all those are pretty much stopped at the ADX. There's no comparison," Linderman explains.

"You talk about the brutality of isolation, what do you mean by that?" Pelley asks.

What does the world look like to a Supermax inmate? Linderman showed 60 Minutes photos of his former 7x12 foot cell, which have a shower, a concrete bed, as well as a window with red concrete bricks behind it.

"It's the only prison I've ever heard of that allows you to take a picture in your cell," Linderman remarks. "I guess they're quite confident in their security."

Confident, but there has been trouble. Until 2005, some general population inmates were allowed in the "rec" yard together and there were occasional fights. In the 14 years it has been open, two inmates have been murdered. And remember Lawrence Klaker, the inmate seen in video shot by prison staff as he arrived at the Supermax? He later killed himself, one of four prisoners who committed suicide.

And there remains another concern for safety. Barbara Batulis told 60 Minutes that the prison is dangerously understaffed, with more than a quarter of the staff jobs unfilled.

"We've been told that entire housing units that house notorious gang members and terrorists have gone uncovered and have been monitored by officers elsewhere in the prison during these staff shortages. Is that true?" Pelley asks.

"I can't really say anything about that. That's internal security and I can't talk about that. I can tell you that we are very short staffed," Batulis says.

It's not just her opinion. In 2006, a federal arbitration judge agreed that the prison was short staffed and said that assaults and threats from inmates were increasing. The current warden met with 60 Minutes briefly and told us the staffing shortage is overblown by the union. But he wouldn't appear on camera. In fact, no one at the Federal Bureau of Prisons would sit down for an interview. Supermax remains the least known prison in America.

"I've heard it described as a clean version of hell," Pelley remarks.

"The perfection of isolation. Is that the way it felt to you?" Pelley asks.

"Yeah, they perfected it there," Linderman says.


There have been some new developments at Supermax. Union officials say staffing levels are better but still below what they consider safe. There've been more hunger strikes and force feedings. And both Tommy Silverstein and Ramzi Yousef have been moved to new cells, which leaves Range 13 empty, at least for now.