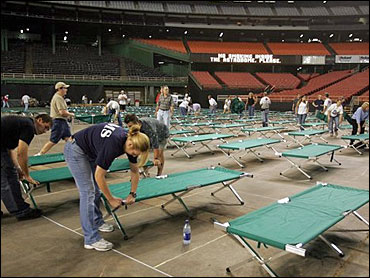 The first caravan of buses with Superdome refugees arrived early Thursday at the Astrodome in Houston, where they'll be sheltered temporarily - possibly for a long time - as authorities and relief officials try to figure out how to help them, and hundreds of thousands of displaced persons from Hurricane Katrina.

As the buses rolled in, some Houston residents were in the parking lot holding signs welcoming their neighbors from Louisiana.

The air-conditioned Texas stadium - abandoned by the Astros five years ago as an outmoded facility - looked pretty good to some of the New Orleans hurricane victims as they got off the bus.

"The storm wasn't nothing," said one. "It was worst the days after, the water rise - we didn't have no kind of water, until the day after the hurricane."

"The Astrodome," said a Red Cross worker on hand to greet the refugees, "is a better place than they have been in until today, I can tell you that much."

The slow exodus from the smelly and sweltering Superdome began Wednesday as bedraggled refugees boarded giant trucks and then buses for a trip to more comfortable surroundings in the Houston Astrodome.

The evacuation was kept almost secret to avoid a stampede. People were taken a few at a time through a garage, then to trucks that plowed through 4 feet of water and delivered them to the buses.

People with physical problems were evacuated Wednesday morning, loaded into a variety of vehicles and taken to a triage center in Baton Rouge. The evacuation of the more able-bodied began later.

Almost everyone carried a plastic bag or bundled bedspread holding the few possessions they had left after Hurricane Katrina decimated their city. Some hobbled on walkers, canes and crutches; others inched forward on wheelchairs. Women led children and carried babies.

"I don't care where they're taking us. Anywhere is better than here," said James Caire, 49, who had been at the Superdome only about six hours.

With no air conditioning and little electricity, the heat and stench inside the Superdome were unbearable for the nearly 25,000 refugees housed there. As the water pressure dropped lower and lower, toilets backed up. The stink was so bad that many medical workers wore masks as they walked around.

Most refugees jammed onto concourses because the heat and stench inside the Superdome were unbearable. But the heat on the brown-brick concourse was horrendous. One man took a paper bag, rolled up the rim and wore it as a hat.

Dr. Kevin Stephens Sr., in charge of the special needs shelter at the dome, described the Superdome and a nearby arena as a health department's nightmare.

"These conditions are atrocious," he said. "We'll take trucks, planes, boats, anything else, I have to get these people out of here."

By mid-afternoon, medics were hauling people off one after another because of heat-related problems. Even as the evacuation was going on, people walked through waist-deep water to get to the Superdome.

Tempers flared in the crowd. One woman yelled: "You're just lying to us! You had us standing all day in this heat, and you're lying to us. You're not taking us anywhere!"

But overall, there was little trouble. People got angry and frustrated and occasionally screamed, but people generally seemed to get along.

The noise around the dome was constant. Helicopters took off and landed on the helipad outside. Generators ran. Trucks backed up and moved past. Every time one baby stopped screaming two more seemed to start. And there was the constant roar of thousands of conversations going on at once.

The Federal Emergency Management Agency has provided about 500 buses to transport the refugees. It was not immediately clear how long the refugees will be in Houston, 350 miles from New Orleans, and the evacuations were to continue through Thursday.

"We're buying time until we can figure something out," said William Lokey, chief coordinator for the Federal Emergency Management Agency.

The Astrodome's schedule has been cleared through December for housing evacuees, said Kathy Walt, a spokeswoman for Texas Gov. Rick Perry. The building no longer is the home of a professional sports team - the Houston Astros left in 2000.

Cots and blankets for up to 25,000 people were being set up on the Astrodome's floor. Knowing that the people would arrive tired, frustrated and disheartened, shelter organizers began planning activities that might help take the evacuees' minds off their troubles, such as free trips to museums and amusement parks.

Organizers plan to use Astrodome kitchens and locker rooms to keep refugees fed and clean, but even though Houston will have the electricity and dry land New Orleans lacks - taking care of thousands at the Astrodome won't be an easy job.

"Obviously, locker rooms were made to handle baseball teams and football teams, not crowds of 20,000 to 25,000 people," says Shea Guinn, president of SMG Reliant Park, which operates both the Superdome and the Astrodome.

Those problems mean nothing to New Orleans flood victims counting the minutes until they can get out of the Superdome and into a place that has clean water, toilets, food and air conditioning.

"I'm ready to get away from here. Anybody in their right mind would be," said David Ellis, a construction worker who was on the ramp outside the Superdome, escaping the oppressive conditions.

Louis Delasorsse, 38, had been at the Superdome since it opened. "It's no picnic staying here. My real heartache is I don't know about my mother, grandfather or grandmother. They wanted to stay at home. I begged them to come with me, but they wouldn't."