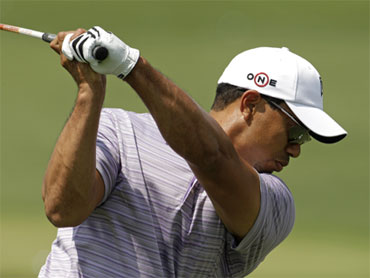 On the heels of the sex scandal that led to a five-month, self-imposed exile form the sport, Woods comes back at golf's most prestigious event, the Masters.

Woods played a practice round in advance of a different kind of round Monday -- with a room full of media, including Keteyian.

A smiling Woods made his surprise afternoon visit to Augusta sporting a lavender shirt and new goatee, hitting shots and chatting with fellow pros before heading off to a practice round on a sun-kissed course, all in advance of Monday's media session.

In a statement to a room full of supporters on Feb. 19, Woods said, "I was wrong. I was foolish. I don't get to play by different rules."

Monday afternoon's news conference will mark the first time Woods answers questions from a room full of reporters and, likely, one of the last stops on his apology tour, Keteyian observes.

In a series of carefully-crafted confessionals, including brief interviews on the Golf Channel and on ESPN, Woods seemed to be setting the tone for Monday, admitting to living what Keteyian calls "a double-life of serial infidelity."

"Yeah," he admitted on March 21 on the Golf Channel, "I tried to stop and I couldn't stop. It was just, it was just horrific."

In an interview that aired that same day on ESPN, Woods remarked, "I saw a person I'd never thought I'd become."

But Woods has revealed little about the circumstances surrounding the car accident that marked the start of the scandal, his multiple affairs, or his relationship with his wife, Elin, who is not expected to attend the Masters. She was spotted in Miami over the weekend.

When Woods does emerge in full public view, he'll find himself wrapped in golf's most beautiful cocoon -- a championship course praised for its pristine setting, knowledgeable and well-behaved fans, and understated security.

"I think it's good he's coming back here," says golfer Mark O'Meara. "I think everybody welcomes him back. We want him back on the golf course. He means a lot to the game, so let's get him back to do what he knows very well."

Now, after five months off, Woods is coming back on golf's greatest stage, where he first played back in 1995, and home to four of his most-cherished victories, a place where he holds the lowest career scoring average of any active pro, ahead of Phil Mickelson and Ernie Els.

If Woods stays in the hunt, experts point out, record TV ratings are all but assured.

"I think if Tiger Woods can make the cut and somehow get himself anywhere in contention going into the weekend," says Golf.com Deputy Editor David Dusek, "you're going to get Super Bowl-type ratings."

Woods has said facing his demons has given him new-found strength and freedom. That, says Keteyian, is about the last thing his rivals need to hear.