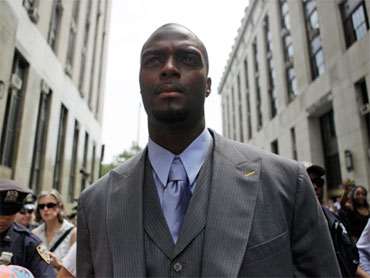 NEW YORK (CBS/AP) It wasn't the shot heard 'round the world, but its repercussions reach beyond the playing field. Former New York Giants wide receiver Plaxico Burress testified Wednesday before the grand jury that is investigating weapons charges against him, and told reporters outside that he was sorry for his actions.

The 31-year-old Burress shot himself in the thigh at a Manhattan nightclub in November. He was charged with weapon possession and faces up to 3½ years in prison.

"I was truthful, I was honest, and I'm truly remorseful for what I've done and for what happened," Burress said outside a Manhattan courthouse.

"I agreed that in order to humanize him they needed to see who he was and what this man was about," Brafman said.

Burress has pleaded not guilty and is free on $100,000 bail. The Giants released him in April.

The New York Post reported earlier this week that Manhattan District Attorney Robert Morgenthau is insisting on jail time. Morgenthau's office has declined to comment to The Associated Press.

Burress, wearing a pinstriped three-piece suit, thanked his family and his fans and did not take questions.

Brafman said Burress "asked the grand jury for compassion and understanding. I think it took a big man, not just physically, but a big man to come here today and acknowledge his responsibility and ask for the compassion of the people who he testified before."

He added, "We are hopeful that the grand jury found Mr. Burress to be honest and truthful. They listened carefully, and now we'll just wait and see what happens."

Burress, who caught the winning touchdown in the final minute of the 2008 Super Bowl, also could face disciplinary action by NFL commissioner Roger Goodell under the league's personal conduct policy. Burress has yet to sign with another team and Goodell's office announced in June that the league had started its examination of the shooting.