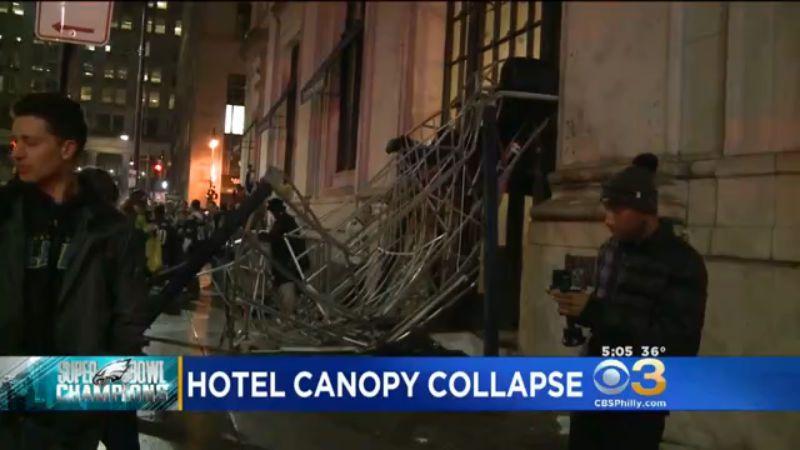 PHILADELPHIA -- It was time to party in the City of Brotherly Love! CBS Philadelphia writes that thousands of fans took to the streets of Philadelphia to celebrate the Eagles' first ever Super Bowl championship as they defeated the Patriots in dramatic fashion, 41-33.

Fans piled into the streets across Philadelphia, from Center City to Northeast Philly, down to South Philly. The awning at the Ritz Carlton collapsed when multiple Eagles fans scaled the awning and it didn't support them.

In South Philadelphia, fans started chanting "Free Bud Light" after the beer manufacturer made a bet with Lane Johnson that if the Eagles win the Super Bowl.

It was a celebration decades in the making.

However, some fans are starting to get rowdy, as a car was overturned during the celebration in Center City.

People were also jumping off The Ritz Carlton awning. It later collapsed.

And despite greasing up the poles across the city, some fans have still been able to climb them.

"What a wonderful game. It was so awesome," one fan told CBS Philadelphia. "They deserved it, they earned it and we wanted it for them."

Mayor Jim Kenney said it was is the day the city has "dreamed of."

"For so many who have called themselves Eagles fans for a generation, this is the day, the game, the season, and the team we've dreamed of. The 2017-18 Philadelphia Eagles are Super Bowl Champions, and they've brought tremendous joy to hundreds of thousands throughout the City and region. They consistently wowed us with their dynamic play and relentless pursuit of victory.  Their 'Next Man Up' mentality when injuries arose was inspiring to anyone who has ever faced a setback, as was their willingness to embrace the role of underdogs. They looked another storied football franchise in the eyes, and never blinked."

He continued, "To the fans: I have long felt that our City's professional and collegiate sports teams bring Philadelphians together, regardless of race, income, neighborhood or gender, and that was never more true than during the Eagles' brilliant season. We know you have waited years, some for decades, for the chance to crown your Birds as champs. I urge everyone to celebrate in a way that is safe and respectful to everyone from neighbors to strangers. Go forth and celebrate, but do so in a way that will make Philadelphia shine."

Pennsylvania Gov. Tom Wolf was at the game to soak in the victory.

"What you give is what you get back. Congratulations on your historic win, @Eagles. We are all incredibly #PAproud. #SuperBowl #FlyEaglesFly," Wolf tweeted.