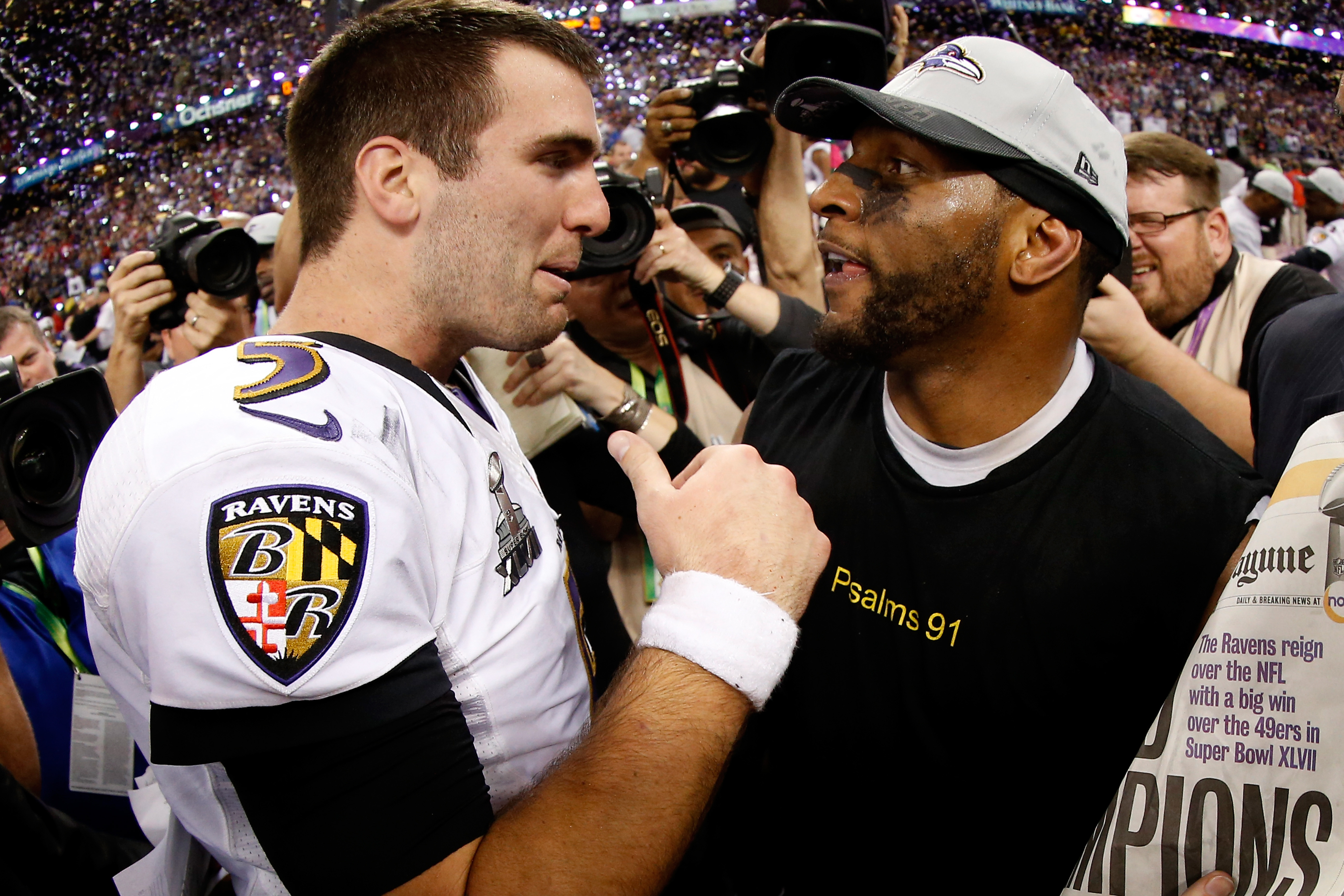 NEW ORLEANS A power outage at the Super Bowl put the nation's biggest sporting event on hold for more than a half-hour Sunday, interrupting an otherwise electric, back-and-forth game that ended with Joe Flacco and the Baltimore Ravens as NFL champions thanks to a 34-31 victory over the San Francisco 49ers.

Moments later, lights lining the indoor arena faded, making it difficult to see. When action resumed, Colin Kaepernick and the 49ers scored 17 consecutive points, getting as close as 31-29.

But Baltimore stopped San Francisco on fourth-and-goal from the 5 with under 2 minutes left when Kaepernick's pass sailed beyond Michael Crabtree in the end zone.

The biggest deficit a team has ever overcome to win a Super Bowl is 10 points, and there were moments were it appeared San Francisco had a chance to better that mark. Instead, the 49ers lost for the first time in six trips to the Super Bowl.

The AFC champion Ravens (14-6), a franchise that moved from Cleveland to Baltimore 17 years ago, improved to 2-0 in the big game. They also won the championship in 2001, when linebacker Ray Lewis was voted the game's MVP. Lewis was not a major factor this time, but he was a center of attention, playing in the final game of his 17-year career before retiring.

Baltimore led 28-6 after Jones opened the second half with the longest kickoff return in a Super Bowl, his eyes glancing up at the videoboard, presumably to watch himself sprint to the end zone. The 49ers showed they were capable of a comeback in their previous game: They trailed by 17 against the Atlanta Falcons before winning the NFC championship game.

This was the 10th time New Orleans hosted the big game — tying Miami for most in a city — and first since Hurricane Katrina devastated the Big Easy in August 2005.

First, Kaepernick threw a 31-yard touchdown pass to Crabtree, pulling them within 15 points midway through the third quarter. Ravens defensive backs Cary Williams and Bernard Pollard missed tackles on the play. Then, with 5 minutes left in the third quarter, Frank Gore swept around right end for a 6-yard TD run, making it 28-20, before Ravens running back Ray Rice's fumble gave the ball right back to the 49ers.

San Francisco tacked on David Akers' 34-yard field goal to get within 28-23 after he missed from a longer distance but the Ravens were whistled for running into the kicker. It was his third successful kick of the game after hitting from 36 and 27 yards in the first half.

How close was it heading into the fourth quarter? Each team had exactly 17 first downs. Total yardage was nearly the same, with the 49ers slightly ahead, 317-315. Time of possession was nearly split down the middle, too.

About 2 minutes into the fourth quarter, rookie kicker Justin Tucker made a 19-yard field goal to stretch the Ravens' lead to 31-23. Not long later, Kaepernick's 15-yard run around the left side — the longest TD run by a quarterback in Super Bowl history — made it 31-29. His 2-point conversion pass intended for Randy Moss was incomplete.

A 38-yarder by Tucker made it 34-29 with 4:19 left in regulation. Baltimore purposely gave up a safety in the closing seconds to run time off the clock, setting the final score.

Kaepernick was making only his 10th start the NFL, having taken over the job after Alex Smith got a concussion during a game. After his touchdown run, Kaepernick kissed his tattooed right biceps, his celebration move.

The first half was all about Flacco. He went 13 for 20 for 192 yards and the three scores over the opening two quarters, becoming only the sixth QB in 47 Super Bowls to throw for that many TDs by halftime.

It's been one impressive game after another for a guy who never has commanded the widespread respect usually accorded a top player — but now will head into an offseason that could land him a $20 million-per-year contract in free agency.

To get to the Super Bowl, Flacco already led the Ravens past Denver's Peyton Manning and New England's Tom Brady for two of his league-record six career postseason road victories by a quarterback.

San Francisco turned over the ball twice in about a 5-minute span of the second quarter: Rookie running back LaMichael James fumbled — leading to a Ravens TD — and safety Ed Reed tied an NFL record with his ninth career postseason interception by picking off Kaepernick.

The Niners had never thrown an interception in their previous five Super Bowls.

There was some testiness on the field right from the get-go, and after Reed stole the ball, a group of players from both teams engaged in a scrum and penalties were called. Both coaching brothers wound up on the field, too, trying to break up the skirmish.

Instead of adding more points after Reed's pick, Baltimore eventually gave the ball back after trying a fake field goal but failing to get a first down. Didn't matter a bit. San Francisco had to punt, and Flacco hit Jones on a 56-yard TD pass with under 2 minutes left in the first half.

Jones beat cornerback Chris Culliver — the player who apologized for anti-gay comments during the week — and tumbled onto his back, then got up and cut across the field to reach the end zone. It was Flacco's 70-yard toss to Jones with 30 seconds left in the fourth quarter that allowed the Ravens to tie the Broncos in the second round of the playoffs, before winning in the second overtime period.

Earlier Sunday, Flacco connected with Anquan Boldin from 13 yards out less than 4½ minutes into the game on Baltimore's first possession, then found tight end Dennis Pitta for a 1-yard score midway through the second quarter after James' error.

James fumbled at Baltimore's 25-yard line while straining to gain extra yards. Linebacker Courtney Upshaw punched the ball loose, and defensive lineman Arthur Jones recovered it, and the Ravens headed the other way.

The 49ers also began the game with an illegal formation penalty on the very first play, then needed to punt.

A good return by Jones set up the Ravens near midfield, and they promptly drove 51 yards in six plays. Another 49ers penalty on third down at the 18 came right before Flacco's nice scoring pass over the middle to Boldin with less than 4½ minutes gone in the game.

About 45 minutes before the opening kickoff, Lewis gathered his teammates in the end zone painted the Ravens' purple team color. As they encircled him, Lewis — large triangles of eye black covering his entire cheeks — delivered his usual rousing pregame speech, and other players whooped it up, too.

Not long after, 49ers linebacker Patrick Willis — who, like Lewis, wears No. 52 — delivered his own fiery words, surrounded by the rest of his team near the red, white and blue NFL shield logo at midfield.

Before the game began, with 100 million or so Americans expected to tune in on TV, a chorus of 26 children from Sandy Hook Elementary School in Newtown, Conn. — where 20 students and six adults were killed in a shooting rampage in December — sang "America the Beautiful," accompanied by "American Idol" alum Jennifer Hudson. Grammy winner Alicia Keys performed the national anthem.