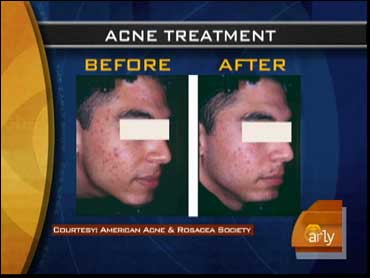 Eighty-five percent of the teenage population battles acne in some form and in most cases, there will be significant improvement of the outbreak when treated with a combination of medication including antibiotics.

However, dermatologists are now warning that a new strain of acne is resistant to antibiotics.

According to Ashton, super acne has probably been around for a while, but more dermatologists are starting to see more and more of it now -- "because just like with a lot of forms of resistant bacteria, it's becoming more refractory or difficult to treat."

Super acne, which is a bacteria, can be classified as a "bug."

"We call this a discussion about bugs and drugs," Dr. Ashton explained. "This is a bacterium known as P. Acnes, and it's part of the skin flora. So what's difficult about it is that a bacteria that we normally see with acne are normally very susceptible to antibiotics."

Unfortunately, unlike other forms of acne, super acne is not very treatable and "about 50 percent of bacteria that cause acne can be resistant," Ashton explained.

A patient might not find out right away if he or she has the resistant bacteria.

"That's the important thing is that, you know, acne can be difficult to treat for a lot of cases," she explained. "But once a dermatologist starts to put you on antibiotics, within weeks to months, your skin should really clear up. So when it doesn't, that's when you would start suspecting it."

"So what alternative are you left with if you've got the 'super bug?'" Smith asked.

"Well, that's the key thing here. The way that antibiotics normally work is they reduce inflammation and cut down obviously on the bacteria, the super growth that forms within this skin unit. When that doesn't work, then you have to move to things like retinoids or Accutane, [which]is the brand name," she said. "Alternative treatments like tea tree oil and things like benzoyl peroxide cut down on oil and unclog the pores."

With the over-use of antibiotics today, their effectiveness is no longer what they used to be.

"Well, yes. And we have to put it into historical context. In the past we used antibiotics because it saved people's lives. Now they're used because they're quick, they're cheap, they're effective," Ashton said. "And what's really sad here, Harry, is that for people suffering with acne it's emotionally and physically scarring."