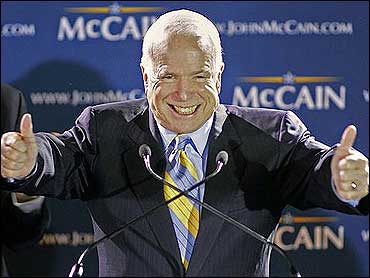 John McCain took a giant step toward the Republican presidential nomination Tuesday with his primary victory in Florida. This was no fluke. A big state where Republicans, (and no independents) voted and picked McCain over Mitt Romney, a favorite of the National Review and a number of radio chatters.

Maybe McCain isn't as hated as some of his enemies wish he was. Too soft on immigration, not enough support on tax cuts. Some people hate McCain because he gets along with the press. I'm thinking these things will matter less as the general election campaign comes into focus. If McCain haters can get over themselves for a moment, they'd realize that this candidate does exactly what a Republican candidate will need to do come November.

That is he will reach beyond the party. The number of people who identify themselves as Republican is shrinking, not growing. There are probably not enough of them to put a more orthodox Republican in the White House.

Maybe all that sunshine helped voters see the light.