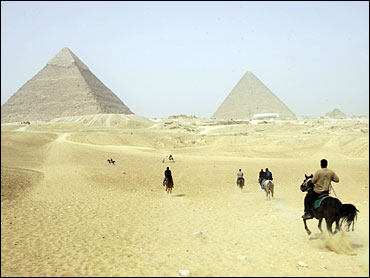 Penny Hardaway got what he wanted Thursday and was traded to the Phoenix Suns, ending his fading star career in Orlando and completing the breakup of a Magic team that went to the NBA Finals just four years ago.

After a final day of reconsidering their options and trying to talk Hardaway into staying, the Magic finally made the trade and acquired Danny Manning, Pat Garrity and two first-round draft picks.

Hardaway, who will be paid $86 million over the next seven years, joins Jason Kidd in what could be one of the most formidable backcourts in the NBA.

Coach Danny Ainge called Hardaway "the most skilled all-around player in the game. All of a sudden I really believe this puts us as one of the elite teams in the NBA."

It was a major coup for the Suns, who had no room under the salary cap to go after free agents, let alone one the stature of Hardaway.

The Magic tried to work out a deal with the Los Angeles Lakers, Toronto Raptors and a few other teams, but all dropped out of the bidding by the middle of the week.

For the Magic, it marked the end of an era. Just a few years ago, the team looked like it would be an enduring Eastern Conference powerhouse when its roster included Hardaway and Shaquille O'Neal.

Instead, the Magic will plunge into a massive rebuilding without a single star left. The Magic have 10 first-round draft picks over the next five years.

"Clearly the goal for the franchise is to win a world championship, even though this might not happen next year," general manager John Gabriel said. "The trade of Penny Hardaway sets us for the launch of a new era and a new team."

"I believe it's the best thing for (Penny) to get a fresh start."

"I have nothing against Orlando. I came to Phoenix and fell in love with Phoenix," Hardaway said Thursday night. "I thank the Magic for going through with the deal because they didn't have to. They saw the same thing I saw; it's time for me to just move on and start a new career. I wanted to do it here in Phoenix."

Hardaway had made it clear to the Suns that they were his first choice, and when Phoenix agreed to pay him the maximum allowable under the collective bargaining agreement it was only a matter of getting Orlando to agree to the trade.

The deal "ranks right up there with any acquisition we've ever made. He's a marquee guy," Suns owner Jerry Colangelo said.

Hardaway opted out of the finl three years of his contract and became a free agent this summer, but only Chicago, the Los Angeles Clippers and Toronto had anywhere near the money available to land him. He made it clear to Magic officials over the past few days that he did not want to return as Orlando -- especially new coach Doc Rivers -- tried in vain to get him to change his mind.

Hardaway was drafted by Golden State as the third pick overall in 1993, then was traded to Orlando, which had drafted O'Neal the previous year. Hardaway and O'Neal almost instantly made the Magic a title contender. By their second season together, 1994-95, the Magic made it to the NBA Finals, where they were swept by the Houston Rockets.

O'Neal left for Los Angeles in 1996, and Hardaway's image as one of the NBA's rising superstars took a beating in the ensuing years as he orchestrated the departure of coach Brian Hill and then sat out most of the 1997-98 season but still played in the All-Star game.

He also had an uneven relationship with Magic coach Chuck Daly, who resigned after the 1999 season, and trade talk began as early as February of 1998, when he nearly was dealt to the New Jersey Nets.

After the Magic were ousted by the 76ers and Hardaway complained about having to defend the speedy Allen Iverson, owner Rich DeVos made it clear that Hardaway's days in Orlando were numbered by saying maybe the Magic didn't need any more superstars.

"We are looking forward to a new era of Magic basketball," Gabriel said, "one we believe will be extremely exciting with the young talent we have and will assemble."

The Magic have traded three starters this offseason, also sending Horace Grant to Seattle and Nick Anderson to Sacramento.

Hardaway averaged 19 points in his six seasons in Orlando, but nagging injuries severely cut into his playing time the last three seasons. Last season, he averaged a career-low 15.8 points per game. He averaged 19 in the playoffs, but shot just 35 percent from the field as Orlando was beaten by Philadelphia in the first round.

Still, he is considered one of the top shooting guards in the game, and his 6-foot-7 height will be invaluable to a Suns team that was often overmatched with Rex Chapman at that position. Hardaway also could form a spectacular fast-break combination with Kidd, arguably the best point guard in the NBA at pushing the ball up the court.

Manning, 33, is the only BA player to come back from three major knee surgeries. He won the NBA Sixth Man award in 1998, just before he went down with his third major knee injury. He came back last season to average 9.1 points and 4.4 rebounds off the bench for Phoenix.

Manning, the college player of the year when he led Kansas to the NCAA championship in 1988, has averaged of 16.6 points per game in 11 NBA seasons.

Garrity, from Notre Dame, averaged 5.6 points as a rookie last season. He has been the property of four teams in his brief professional career. He was drafted by Milwaukee, then traded to Dallas, which dealt him to Phoenix before he'd ever played a game.