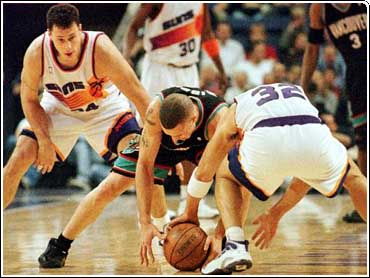 Just a few days after Colangelo's comments on a radio talk show and in a newspaper column, Longley scored a season-high 20 points Tuesday as the Phoenix Suns beat the Vancouver Grizzlies for the ninth consecutive time, 94-76.

"I've had a disappointing season," Longley said. "There's a half-season left for me to continue playing well. That was my intention whether Jerry said anything about it or not. It certainly wasn't news to me that I wasn't playing satisfactorily."

Penny Hardaway added 13 points on 6-for-7 shooting and grabbed eight rebounds as the Suns improved to 20-5 at home.

After missing 31 games while recovering from arthroscopic knee surgery, rookie Shawn Marion had 10 points and seven rebounds in 19 minutes for Phoenix, which had six players in double figures.

The Suns led from the opening basket, were up by 11 in the first quarter, led 10 in the second and had a 14-point edge entering the fourth.

Vancouver's all-Arizona backcourt of Michael Dickerson and Mike Bibby provided much of the Grizzlies' offense. Dickerson scored 19 and Bibby 12. Shareef Abdur-Rahim, coming off a 36-point, 22-rebound game at Dallas Sunday, had 13 points and 10 rebounds.

Longley, accused by Colangelo of not playing up to the six-year, $36 million contract he signed with th Suns before last season, scored 14 in the first half.

"We just need him to take those shots, not pass them up," Phoenix coach Scott Skiles said. "You have to understand it's not just the numbers with Luc. It is that interior defense. That's an important part of our team. But having said that, when he's stroking it like that, and he can come down and trail on the break and knock down that 17-footer, it's a valuable weapon."

Longley finished 9-for-14 from the field with six rebounds, coming within four points of his career high and one point of his best with the Suns.

"We knew Luc could play like that," Jason Kidd said. "Luc came out and made shots. It just makes us so much better when he's making shots. He can shoot and he can pass. We want that from him more often."

The Suns put the game away with an 11-0 run that began with Hardaway's three-point play with 1:26 left in the third quarter. Cliff Robinson's two free throws capped the surge and put Phoenix up 82-62 with 9:08 to play.

"It wasn't a very inspired effort tonight," Vancouver coach Lionel Hollins said. "We came out and we played soft. We played scared. We weren't aggressive. We just didn't compete."