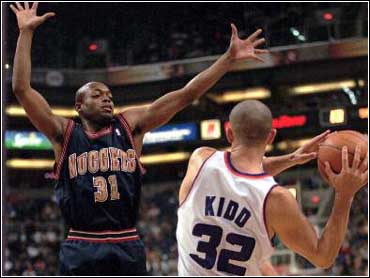 Phoenix Suns coach Scott Skiles has been preaching the value of playing good defense, and his players are becoming believers.

The 67 points were the fewest allowed by the Suns since an 88-65 victory over the Chicago Bulls on March 6, 1975. Phoenix also set a franchise mark for fewest points allowed in a half, holding Denver to 25 first-half points on 10-of-40 shooting.

"We just played defense," said Jason Kidd, who had 10 points and six assists while playing just 27 minutes. "That's been the hot topic and our biggest weakness. When you play hard and you play defense, the offense will take care of itself."

The Suns' season-high seventh win and eighth straight home win moved them into sole possession of fourth place in the Western Conference, a half-game ahead of the Utah Jazz. The Suns had been in eighth as recently as Jan. 31.

"We've been waiting for this kind of streak," said Tom Gugliotta, who had 12 points and seven rebounds. "We're enjoying it right now. We're starting to relax and play without thinking about everything we do."

Clifford Robinson added 12 points for the Suns, who outscored the Nuggets 43-16 in the final 20 minutes of the first half en route to a 25-point halftime lead.

The Nuggets' nine second-quarter points also were a season low. Denver was just 3-of-14 from the floor in the period and had only one field goal over the final 6:56 of the first half.

"We had no chance at all from the beginning of the game," said McDyess, who scored 10 of the Nuggets' first-half points and finished with 12 despite shooting 4-of-13. "They jumped right on us and before I knew it, we were down 25."

James Posey led the Nuggets with 14.

McDyess scored six of Denver's first nine points, including a rim-rattling dunk that gave the Nuggets a 9-7 lead with 8:32 left in the first quarter.

Gugliotta gave the Suns the lead for good two minutes later on a 15-foot jumper from the baseline.

Robinson, who scored 50 in the last meeting in Phoenix, hit a pair of 3-pointers and Rogers and Jason Kidd also had 3-pointers as the Suns closed the quarter with a 14-4 run for a 29-16 lead.

"Our shots weren't going in early and we got real frustrated with that and we quit playing the rest of the game," Nuggets coach Dan Issel said. "This was one of those nights when you're happy they can only count it as one loss."

"You don't see us making the same mistakes," Robinson said. "If we make a mistake, we adjust from it. We're going in the right direction."