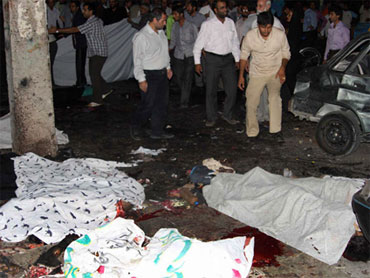 A Sunni insurgent group said it carried out a double suicide bombing against a Shiite mosque in southeast Iran to avenge the execution of its leader, as Iranian authorities Friday said the death toll rose to 27 people, including members of the elite Revolutionary Guard.

The insurgent group, Jundallah, has repeatedly succeeded in carrying out deadly strikes on the Guard, the country's most powerful military force - including an October suicide bombing that killed more than 40 people. The new attack was a sign that the group is still able to carry out devastating bombings even after Iran hanged its leader Abdulmalik Rigi and his brother earlier this year.

Shiite worshippers were attending ceremonies marking the birthday of the Prophet Muhammad's grandson, Hussein, when the first blast went off at the entrance of the mosque in the provincial capital Zahedan. The male bomber was disguised as a woman, local lawmaker Hossein Ali Shahriari told the ISNA news agency.

Inside the mosque, a cleric was reading from the Quran in front of lines of faithful sitting cross-legged on the floor when the building suddenly shook from the blast and screams were heard from outside, according to footage taken at the time and aired on Iranian state TV.

As people rushed to help, the second explosion detonated 20 minutes later, causing the majority of the deaths and injuries, ISNA reported. The technique is often used by Sunni militants in Iraq to maximize casualties.

Members of the Guard were among the worshippers, particularly because the ceremonies coincided with Iran's official Revolutionary Guard Day. The deputy interior minister, Ali Abdollahi, told the Fars news agency Thursday that several Guard members were among the dead.

Health Minister Marzieh Vahid Dastagerdi told ISNA on Friday that the toll stood at 27 dead but could still rise, with another 270 injured, including 11 in serious condition.

Iran accuses the United States and Britain of supporting Jundallah in a plot to weaken Tehran clerical leadership, a claim both countries deny. On Friday, officials blamed them for the latest attack.

Gen. Hossein Salami, deputy head of the Revolutionary Guard, told worshippers at the main weekly prayers in Tehran that the victims "were martyred by hands of mercenaries of the U.S. and U.K."

He was echoed by influential lawmaker Alaeddin Boroujerdi who said "America should be answerable for the terrorist incident in Zahedan."

U.S. President Barack Obama condemned the bombings, which he called the "outrageous."

"The murder of innocent civilians in their place of worship is an intolerable offense, and those who carried it out must be held accountable. The United States stands with the families and loved ones of those killed and injured, and with the Iranian people, in the face of this injustice," the president said in a statement.

Jundallah has been waging an insurgency for years in the remote Sistan-Baluchistan province, a lawless area where smuggling and banditry are rife. The groups says it is fighting for the rights of the mainly Sunni ethnic Baluchi minority, which it says suffers discrimination at the hands of Iran's Shiite's leadership. Iran has accused the group of links to al Qaeda, but experts say no evidence of such a link has been found.

Iran executed Jundallah's leader in June in Zahedan, a month after hanging his brother Abdulhamid Rigi, who had been captured in Pakistan in 2008 and extradited to Iran. The group named a new leader, al-Hajj Mohammed Dhahir Baluch.

In a statement posted on its Web site, Jundallah claimed responsibility for Thursday night's blast, saying they were to avenge Abdulmalik Rigi's death. It showed pictures of two suicide bombers wearing explosive vests, identified as Mohammad and Mujahid Rigi, apparently members of the leader's clan, though the site did not specify their relationship to him.

The group said its "sons of the faith ... carried out tonight a heroic unprecedented operation at the heart of an assembly of the Guard at Zahedan," claiming to have killed more than 100.

Jundallah has repeatedly targeted the Revolutionary Guards. In its deadliest attack, a suicide bomber hit a meeting between Guard commanders and Shiite and Sunni tribal leaders in the border town of Pishin on Oct. 18, killing 42 people, including 15 Guard members.

The group struck another mosque in Zahedan in May 2009, killing 25 people. In February 2007, a Jundallah car bomb blew up a bus carrying Revolutionary Guards in Zahedan, killing 11.