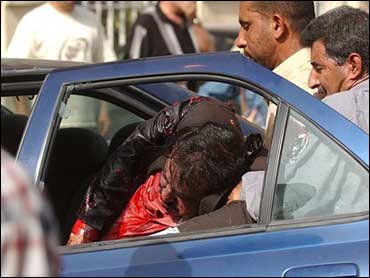 Gunmen assassinated two Sunni Arabs involved in the drafting of Iraq's constitution Tuesday, another blow to U.S. and Iraqi efforts to draw members of the disaffected community away from the insurgency and into the political process.

Mijbil Issa, a committee member, Dhamin Hussein al-Obeidi, an adviser to the group, and their bodyguard died in a hail of gunfire from two vehicles as they left a restaurant in Baghdad's Karradah district, police said.

Issa, a prominent lawyer, was among 15 Sunni Arabs appointed last month to the 55-member constitutional committee — made up mostly of Shiites and Kurds — to give the Sunni minority a greater voice in building a new Iraq. Ten other Sunnis, including al-Obeidi, were named as advisers to the committee.

Insurgents had threatened Sunnis who participated in drafting the new constitution, and two committee members had already resigned over fears for their lives. Issa was the first to be assassinated.

The attack occurred as the committee was meeting at Baghdad's Convention Center in the Green Zone. The session was suspended when members heard the news.

"The assassination will not change anything concerning our participation," Sunni committee member Mohammed Abed-Rabbou said. "Our stance is fixed and those who decide to follow this track expect such things."

Committee Chairman Human Hammoudi said the assassination was intended "to hinder the political process, but we will continue our work, and so will our Sunni brothers."

Ali al-Adeeb, a prominent Shiite from al-Jaafari's Dawa party, blamed "terrorist forces" for trying to undermine Iraq's march to democracy but said the "Sunni brothers" on the committee "have the courage to continue their work."

In Jordan, Iraq's planning minister, Barham Salih, told reporters the killings serve as a reminder "of the challenges that we're facing in Iraq."

"But we believe we should double the efforts for the reconstruction of Iraq and to make sure that the terrorists and extremists would not win," said Salih, a Kurdish politician attending a conference on Iraqi reconstruction.

Earlier Tuesday, President Jalal Talabani predicted that the constitution could be completed by the end of the month if a deal can be worked out with Sunni Arabs who have reservations about parts of the document.

Privately, however, several committee members have expressed doubts that differences among the Shiite, Kurdish and Sunni Arab members can be overcome with less than a month to go before the deadline.

Major obstacles include whether to describe Iraq as an Arab country — which the non-Arab Kurds oppose — and federalism, which the Kurds demand but Sunnis fear will lead to the disintegration of Iraq. Some Shiites want a stronger role for Islamic law in the legal code.

However, the United States and Britain are putting strong pressure on the committee to meet the Aug. 15 deadline — in part to demonstrate political progress at a time when support for the Iraq mission is eroding due to mounting casualties and the seemingly endless bloodshed.

"America and England are in a hurry so that a constitution be drafted," complained Kurdish committee member Mahmoud Othman. "We are not in hurry. The deadline is Aug. 15. I say Sept. 15, what is the difference? This is the problem. They are interfering in our affairs."

Pressure is mounting on the Iraqis to complete the document as the insurgents have stepped up suicide bombings and assassinations. On Tuesday, gunmen opened fire on a minibus carrying Iraqi workers to a U.S. airbase near Baqouba, killing 13. Police said the dead included 10 base employees and three people in another vehicle.

Gunmen killed seven people, including a police colonel, in a series of attacks in Mosul, 225 miles northwest of Baghdad.