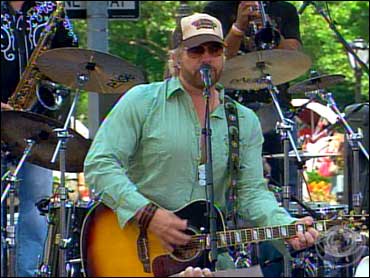 An earthquake 1,200 years ago sent the ancient port city of Herakleion crashing to the Mediterranean floor. On Thursday, archaeologists unveiled some of its hidden treasures, including a giant stone tablet that pinpointed the lost city's location.

The tablet, or stela, was one of two, and the other, researchers said, was among the largest ever found. The smaller block, almost black in color and about a third the size of the giant stela, stood supported by a frame.

The two stone tablets were displayed Thursday on a barge moored in Abu Qir Bay, east of modern Alexandria's downtown. On the same barge were three giant statues, one of Hapi, the god of the Nile flood, and the others of a pharaoh and his queen, both unidentified.

"Just after a couple of dives, we discovered so many objects. The site is rich and amazing," said diver Eric Smith, of Key West, Fla.

The excavation proves that Herakleion was "an important pharaonic harbor city and entrance to ancient Egypt," said French archaeologist Franck Goddio, the leader of the international team excavating the underwater site. "We have learned so much in just one year."

Hieroglyphic text on the smaller stela gave the city's name and said the giant stone was set at the Nile's exit into the Mediterranean by order of Pharaoh Nektanebo I in 380 B.C., Goddio said.

About 1,200 years ago an earthquake sent Herakleion and nearby Canopus and Menouthis to the sea bottom. The three cities were known only through Greek tragedies, travelogues and legends until Goddio's team announced last year that they had been rediscovered after a two-year search off Egypt's northern coast in waters 20- to 30-feet-deep.

The team has been working since then at a site about four miles out to sea. Temples, foundations and 10 sunken boats are among discoveries that have helped confirm the harbor's location.

Ibrahim Darwish, director of the underwater department of the Supreme Council of Antiquities, said as many as 20,000 pieces remain on the sea floor.

"Excavation could continue here for another 100 years, the site is that large," Darwish said of the dig, which measures about two-thirds of a mile by three-quarters of a mile.

The other stela displayed Thursday was found broken into 15 pieces that together weighed 10 tons. If pieced together, it would stand 20-feet tall, 10-feet wide and as deep as a hand. It bore Greek and hieroglyphic inscriptions that have not yet been deciphered.

The stelae and three statues were to be taken to the government antiquities laboratory in Alexandria for desalinization treatment before being sent on an international tour at the end of 2003, Goddio said. Details of the tour have not yet been worked out.

The soon-to-be-opened Alexandria library is being considered as a permanent home for the Herakleion discoveries. The modern research center, set to open later this year, commemorates the ancient Great Library at Alexandria, founded around 295 B.C. and destroyed under msterious circumstances sometime in the first century B.C.

Darwish said authorities were looking at building two new Alexandria museums, one onshore and the other under water, where the pieces may be housed.

Herakleion was a flourishing customs port and at one time Egypt's largest harbor, located at the mouth of the Canopus branch of the Nile. That was until the founding of Alexandria by Alexander the Great in 331 B.C., who put to use its three large bays.

Travelers, such as the Greek Herodotus, who visited Egypt in 450 B.C., wrote about Herakleion and its temple dedicated to Hercules. Other ancient accounts described the city's luxury and its decadence.