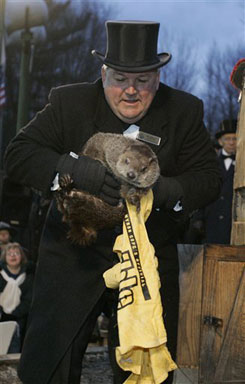 Scoring seemed as simple as shooting for Mats Sundin and the Toronto Maple Leafs against the floundering Chicago Blackhawks.

"It was one of the nights, especially in the third period, where it seemed like every shot we took went into the net," Sundin said Thursday night after scoring three goals to power a 10-3 rout of the nearly defenseless Blackhawks. "One of these nights doesn't come around too often where everything is going your way."

"What step do you go next after having been a disgrace to the uniform?" asked frustrated first-year coach Dirk Graham. "There is no place for people to hide. It's ugly, it's easy to see it."

Sundin got his sixth career hat trick, peppering Chicago goalie Jeff Hackett, who was pulled three minutes into the final period after surrendering his fifth and sixth goals on just 21 shots.

Toronto then added four goals against backup Mark Fitzpatrick, scoring six times overall on just 11 shots in the final period. The Maple Leafs scored on their first four shots of the third and five of their first six.

"Mats was scoring from angles where other players get stuffed. He can put it in from a lot of places where others can't," Toronto coach Pat Quinn said.

"You have these games on occasion and there is nthing like them to get your confidence up. I also know the other side. It's going to straighten out but it's really painful when it's going on."

Sundin got his first goal late in the opening period to give the Maple Leafs a 2-0 lead against the slow-starting Blackhawks, who have been outscored 22-7 in the first period this season and 12-1 during their eight-game skid.

Derek King's short rebound goal came from right in front after Hackett had stopped one shot and the puck wasn't cleared from the crease. That made it 1-0.

Later in the period, Sundin's shot from the right circle on the power play went through Hackett's legs to give the Maple Leafs a two-goal lead.

Sundin scored again early in the second from nearly the same spot, taking a crossing pass from Dimitri Yushkevich and wristing the puck through Hackett's legs.

Three minutes later, Sundin's shot from in close on the right side went off Hackett's pad and into the net for a four-goal Toronto lead, his eighth goal of the season.

Dan Cleary's rebound goal after the puck had been slapped to the left circle accounted for Chicago's score and made it 4-1 after two.

But Steve Thomas' slap shot from between the circles less than a minute into the final period went sailing past Hackett and it was 5-1. Two minutes later, Hackett was beaten on Fredrik Modin's high shot off the right wing and replaced by Fitzpatrick.

Chicago's Tony Amonte got his 10th goal in the final period, skating ahead of the Maple Leafs' defense and faking Felix Potvin to make it 6-2.

But Toronto's Garry Valk answered less than two minutes later, and King got his second of the night to make it 8-2 as the Maple Leafs scored on their first four shots of the final period. Sylvain Cote had Toronto's ninth goal of the night and Todd White scored his first of the season for Chicago on the power play. Mike Johnson capped the scoring with less than two minutes left.

Chicago defenseman Chris Chelios pulled a groin in the first period and could not return.