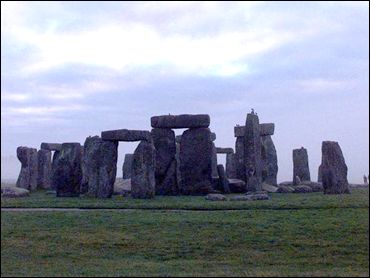 Druids, New Agers and people just looking for a party are descending on Stonehenge on Friday to mark the mystical moment when the sun rises over the stones for the summer solstice.

Beating drums and wearing rainbow cloaks, the revelers walked through light rain to talk, dance and meditate as they waited for Saturday's 4:58 a.m. sunrise, which starts the longest day of the year in the northern hemisphere.

Others were in a less serious mood.

"We heard about it through our really studious friend but we're gonna come and get drunk. We're halfway gone right now," said Alison Newcomer, a 21-year-old student from Minneapolis, Minnesota.

Zoe Neale, 48, cheerfully admitted her visit to Stonehenge "is part of my mid-life crisis." She left her West London office amid gentle teasing from her colleagues Friday afternoon to see a very English tradition.

"I've always thought it's just a bunch of old hippies. I'm just going to ignore the hippie things and think about Stonehenge and the sunrise," she said.

Organizers expect 25,000 revelers to come through the night. They will be allowed access throughout the night to the stone circle, which is usually closed to visitors. Representatives of English Heritage, the monument's caretaker, will be on hand to make sure no one carried away with the celebratory spirit climbs on or vandalizes the stones.

Stonehenge, on the Salisbury Plain about 90 miles southwest of London, was built over three phases between 3,000 B.C. and 1,600 B.C. It is one of Britain's most popular tourist attractions; more than 750,000 people visit every year.

Though the stone circle's alignment with the midsummer sunrise makes it an ideal location for celebrating the solstice, the event has a controversial past.

The solstice celebration in 1985 was the occasion of a violent clash between police and revelers, causing the monument to be closed for the solstice for 15 years. During those years riot police and people determined to celebrate the solstice often clashed.

But in 2000, English Heritage reopened Stonehenge for the solstice and celebrations since have been peaceful, with only a few arrests for minor offenses each year.

Solstices were an important part of Europe's pre-Christian calendar and many speculate Stonehenge's orientation offers clues to its creators' pagan traditions.

The original purpose of Stonehenge is debated, but recent evidence has shed some light on the mystery. In May, researchers reported the stone circle was used as a burial ground since its initial construction. Cremated remains found at Stonehenge date back to 3,000 B.C. and radiocarbon dating shows burials continued at the site for at least 500 years. It is estimated that at least 240 people were buried at Stonehenge.