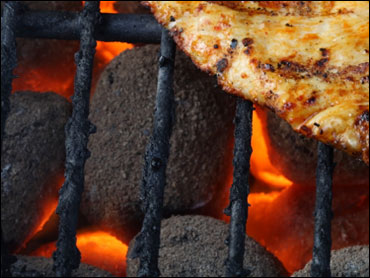 So - you think you know all you need to about staying safe and healthy during the summer?

What if much of what you think you know is wrong?

On "The Early Show" Tuesday, Men's Health magazine Senior Editor Matt Bean punched holes in much of the conventional wisdom about summer.

The smoke particulates can definitely damage your lungs, says A. James Mamary, M.D., of the Temple Lung Center. Smoke inhalation increases your risk of cancer, and unfortunately, the type of smoke doesn't really matter. According to Clean Air Revival Inc.'s website, the Environmental Protection Administration estimates that wood smoke is 12 times more carcinogenic than equal amounts of tobacco smoke, and that it stays active in the body up to 40 times longer than tobacco smoke. In fact, the American Cancer Association says inhaling the smoke from or eating well-done, charred meat regularly "may increase your risk of pancreatic cancer by up to 60 percent, according to findings from a (2009) University of Minnesota study."

An easy way to avoid this is to stay upwind of the grill. If you're doing the grilling, do your best to position yourself away from the smoke. Sometimes, it's unavoidable when you're in the thick of a major cookout, but follow those guidelines and you'll be doing yourself good.

True or False: It's Not Wise to Drink from Hoses

No germs specifically live in water hoses, and the water from your outdoor hose is no riskier than any other water source in your home. However, the germs, the danger and the risk come from where your hose lives, generally in your garden or your lawn. Beware of germs from animal feces, or other harmful germs that could contaminate your average hose. The same goes for items such as blow-up pools, floats, water fountains, etc.

A lot of us have heard that dunking an open wound into the sea is good, because saltwater helps the healing process. This is not true. The sea is FULL of bacteria that can enter your cut and cause sores or even lead to infection. Not only does saltwater not help heal a wound, it does NOT clean it out properly, either. The reason dentists sometimes suggest we rinse our mouths with salty water (after extractions or when we have ulcers, etc.) is that the saltwater is "isotonic" and less irritating to the mucous membranes in the mouth. It is NOT as an antibacterial agent. (This was proven in a study released in the British Dental Journal around 2004.

There are several things you can do. Saliva is good for open wounds. The digestive enzyme in saliva can clean wounds and kill microorganisms. It has not been shown that human licking of wounds disinfects them per se, but licking is likely to help clean the wound by removing larger contaminants, such as dirt, and may help to directly remove infective bodies by brushing them away. Therefore, licking would be a way of wiping off pathogens, useful if clean water isn't available. After cleaning the wound with either saliva or water, a liquid bandage is perfect for beachgoers, using brands such as New Skin. It not only adheres nicely to the wound, but it blocks additional bacteria from entering.

True or False: Mosquitoes are Attracted to "Sweet Skin"

First of all, it's important to note that countless studies have proven that mosquitoes are in fact more attracted to certain kinds of people. As a general rule, mosquitoes are highly attracted to one-out-of-ten of us. There is no such thing as "sweet skin" per se, but if you use flowery or fruity lotions on your skin, or give off sweet smells, such as that from perfume, hair oil and deodorant, mosquitoes will be more attracted to you. They also are drawn to dark clothing, said Joe Conlon, American Mosquito Control Association technical adviser.

So, if you're going out on a muggy and still night, steer clear of flowery, fruity scents anywhere on your body. Wear lighter-colored clothing, and use repellant. Many mosquito repellants are even approved by environmental agencies as good for the environment and not harmful to you.

True or False: Urinating on a Jellyfish Sting Helps Ease the Pain

It doesn't help at all, and in some cases, could even make it worse by setting off the remaining stinging cells, increasing the discomfort. Urine is too much like freshwater, and freshwater will react to the chemicals in the tentacles, increasing the likelihood of greater pain. And, according to Scientific American, "A freshwater rinse will have the opposite effect. Any change to the balance of solutes, such as the concentration of salts inside and outside of the cnidocyte, sets off stinging. Adding freshwater to the sting site dilutes the salts outside the cell, unbalancing the solutes. In reaction to this change, the nematocysts in the cells release more venom -- and cause more pain."

If you're stung by a box jellyfish, seek medical help immediately. While you're waiting, flood the area with vinegar and stay as still as possible. If you're not close to medical care, soak the area and tentacles for 10 minutes or more, before attempting to remove them. If the sting is on the arms or legs, you can place a pressure dressing (such as the ACE wrap used for a sprained ankle) around the sting. Be careful that you don't stop blood flow -- the fingers and toes should always stay pink. This will help slow down the spread of the toxin.

True or false: A Sunburn Will Fade into a Tan

Sunburn is a burn, not a prerequisite stage for a tan. Fading sunburns will result in skin damage, redness, and eventual peeling, not a healthy brown glow. Of course, any amount of exposure will increase the risk of developing skin cancer and premature aging, but sunburn poses an even stronger risk. So, avoid sunburn as a route to an eventual tan; it won't get you one.