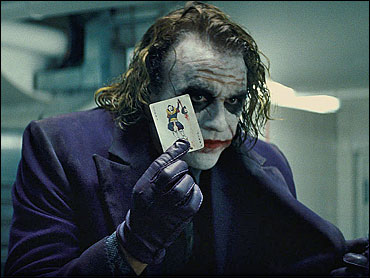 Times may be tough in the real world. Not in Hollywood.

As it usually does during economic downturns, the movie business has come on strong, expected to set a summer revenue record of about $4.2 billion from the first weekend in May through Labor Day, according to box-office tracker Media By Numbers.

That would put Hollywood a fraction ahead of the previous record of $4.18 billion in summer 2007, though accounting for inflation, the actual number of tickets sold - about 587 million - is down 3.5 percent.

Still, given the sluggish economy, studio executives are happy their business held up so well. It's almost a tradition dating back to the Depression: When the economy goes sour, the escapism and relative cheapness of a night at the movies is an attractive prospect for audiences.

"Let's face it. It is truly one of the least-expensive ways to entertain yourself for a few hours," said Rory Bruer, head of distribution at Sony, whose summer releases included Will Smith's latest $200 million hit, "Hancock."

The behemoth of summer was the Warner Bros. Batman sequel "The Dark Knight," whose haul - $500 million and counting - amounted to nearly one-eighth of overall Hollywood revenues.

"The Dark Knight" passed "Star Wars" to rank No. 2 on the all-time domestic revenue chart, behind only "Titanic" at $600.8 million.

Batman mania already was high as production wrapped last fall, but it grew to a fever after Heath Ledger, who co-stars as the Joker, died in January.

"We would not be looking at a $4 billion summer if not for 'The Dark Knight,'" said Paul Dergarabedian, Media By Numbers president. "In this case, one film made a huge difference."

"The Dark Knight" and four other superhero tales - "Hancock," Paramount's "Iron Man," and Universal's "The Incredible Hulk" and "Hellboy II: The Golden Army" - rang up $1.25 billion, 30 percent of the summer box office.

Add in the $315 million take for Paramount's "Indiana Jones and the Kingdom of the Crystal Skull" and it's clear that audiences were looking for pure adventure this summer.

On the family front, the animated tales "WALL-E" from Disney and "Kung Fu Panda" from DreamWorks both topped $200 million. There was a healthy dose of chick flicks during the male-dominated summer with Warner's "Sex and the City" and Universal's "Mamma Mia!" - both $100 million hits.

Raunchy comedy also packed in crowds with the R-rated hits "Tropic Thunder" from Paramount and "Step Brothers" and "Pineapple Express," both from Sony.

Some major flops accompanied the successes. Eddie Murphy bombed with his sci-fi comedy "Meet Dave" from 20th Century Fox, as did Mike Myers with Paramount's comedy "The Love Guru."

Yet most big studio films delivered, finding both commercial success and better-than-usual reaction from critics, who typically tear many summer blockbusters to shreds. "The Dark Knight" and "Iron Man" earned some of the best reviews ever for summer popcorn flicks, the acclaim helping to keep the theaters packed.

"It's the old story," said Dan Fellman, head of distribution at Warner Bros. "Give the people what they want and they'll come out in big numbers."
By David Germain