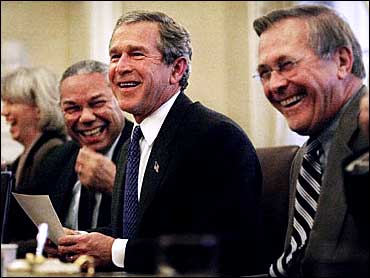 A group of U.S. soldiers, parents of soldiers and six U.S. House members filed a lawsuit in federal court Thursday seeking to stop the president from launching a war against Iraq without a declaration of war from Congress.

The lawsuit seeks an immediate injunction against Bush and Defense Secretary Donald Rumsfeld to prevent them from launching an invasion of Iraq.

Reps. John Conyers, D-Mich., and the other plaintiffs in the lawsuit say a resolution passed by Congress in October did not specifically declare war and unlawfully ceded the decision to Mr. Bush.

Conyers cited an excerpt from Article 1, Section 8 of the U.S. Constitution that states, "Congress shall have power ... to declare war."

"Get it? Only Congress," Conyers said Thursday at a news conference in Washington.

John Bonifaz, the Boston attorney who filed the lawsuit, said Mr. Bush is rushing to war without seeking approval or even a thorough debate by Congress.

"We have a message for President Bush today — read the Constitution," Bonifaz said.

"The president is not a king," he said. "He does not have the power to wage war against another country absent a declaration of war from Congress."

Congress has not formally declared a war since World War II.

A similar lawsuit filed against Mr. Bush's father before the Gulf War by 54 members of Congress was denied by a federal judge in December 1990.

That judge said he agreed in principle that the president must seek congressional authorization for war, but said the elder President Bush had not clearly committed to a course of action. The judge also noted that only about 10 percent of the Congress had asked for the injunction — a percentage he said wasn't representative of the entire body.

Bonifaz said this new lawsuit is different because in addition to the six members of Congress, soldiers have asked for the injunction.

"They are facing the possibility of death," he said.

One of the plaintiffs, Nancy Lessin, said the people planning the war aren't facing the possibility their loved ones will be killed. She said she has 25-year-old twin stepsons, one of whom is in the Marines.

"We'd like to challenge George Bush to send one of his twins to war. Then let's have a discussion about whether or not we should go to war," she said. The president has 21-year-old twin daughters.

Bonifaz said several similar lawsuits filed by soldiers during the Vietnam War were unsuccessful. But he said those lawsuits failed because the courts found Congress had taken concrete steps to authorize a war, including appropriating money and authorizing the draft.

Other plaintiffs include a member of the Massachusetts National Guard who was recently activated, an Air Force Reservist from Massachusetts, and a U.S. Marine stationed in the Persian Gulf, Bonifaz said. Their identities are not being made public, Bonifaz said.