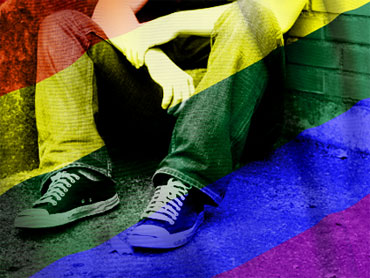 (CBS) Being young and gay can be deadly, especially if you are raised in the wrong place.

That's the conclusion of a new study out of Columbia University which found self-identified gay, lesbian and bisexual teens were five times more likely to attempt suicide than their heterosexual counterparts. More than 20 percent of the 1,400 LGB teens in the study said they had done so.

The research supports previous studies, which found high rates of suicide amongst LGB youth, but scientists found something else this time - where you live can make a difference. In areas more antagonistic to homosexuals, suicide attempt rates were 20 percent higher for LGB teens.

Researchers, led by Mark Hatzenbuehler, studied surveys from 34 counties of Oregon. The state was chosen because it is the only one that records sexual orientation and suicide attempts in detail, according to the Oregonian.

For each county, Hatzenbuehler's team tracked the proportion of same-sex couples, number of schools with gay-straight alliances and anti-bullying policies in the schools. They also tracked the number of registered Democrats. They combined these factors into one score that attempted to rate counties on how supportive an environment they created for LGB teens.

LGB teens were more likely to attempt suicide in "less supportive" counties but interestingly, so were straights.

The research is sure to add fuel to the debate over anti-bullying programs around the country that try to help gay, lesbian, bisexual and transgendered teens. Conservative opponents say the programs push a homosexual agenda on kids. Proponents say something must be done after a series of high profile suicides of gay youth including Rutgers student Tyler Clementi, 13-year-olds Asher Brown and Seth Walsh and 15-year-old Justin Aaberg.

"Regardless of your views, our data suggests that the inclusion of gay straight alliances and anti-discrimination programs can have really important mental health outcomes for our youths," Hatzenbuehler told CBS News. "This is a road map to how we can begin to reduce teen suicide," he added.

The study was published in the journal Pediatrics.