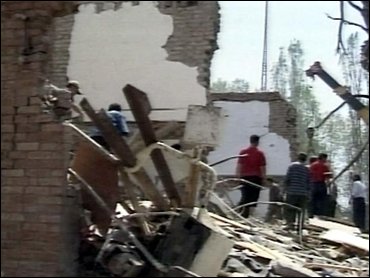 A female suicide bomber blew herself up Wednesday at a religious ceremony in Chechnya, killing at least 20 people and wounding dozens of others in the second major attack in the breakaway republic in the past three days.

Maj. General Ruslan Avtayev of the Ministry of Emergency Situations told The Associated Press that the woman detonated a bomb she was wearing around her waist. The injured were taken to nearby hospitals.

Several thousand Muslim pilgrims were attending a religious ceremony in memory of three highly respected sheikhs in the Caucasus in their native village of Ilaskhan-Yurt about 15 miles southeast of the capital Grozny.

The attacker apparently was trying to kill Akhmad Kadyrov, the head of Chechnya's Moscow-backed administration, who was in attendance, the Interfax new agency said. Several thousand people had gathered for the prayer service.

Wednesday's attack came just two days after a deadly truck bombing that shattered a government compound in northern Chechnya. The death toll in that attack rose to 59 on Wednesday.

Akhmed Dzheirkhanov, the deputy minister for emergency situations in Chechnya, said four people had died overnight as a result of injuries sustained in Monday's blast.

Russian President Vladimir Putin, at a meeting with NATO-Secretary General Lord Robertson on Tuesday, compared the bombing in Chechnya on Monday to the deadly blast in Saudi Arabia aimed at foreigners.

"The signature in both places is absolutely identical," said Putin, who is seeking to portray Russia's war in Chechnya as part of the international campaign against terrorism.

Col. Ilya Shabalkin, a regional Russian commander in the Caucasus, said Wednesday on Russian television that the mastermind of Monday's bombing was Abu Walid, a Saudi Arabian national. Shabalkin said Abu Walid had replaced Omar Ibn al Khattab, a prominent Saudi-born warlord who is alleged to have been killed by poisoning last year in Chechnya. Shabalkin presented no proof to back up his claim. Other officials said it was too early to know who was behind the attack.

The blasts raised questions about the level of security provided by federal forces in the war-shattered republic. Kadyrov said this week that responsibility for fighting rebels should be switched to the region's own Interior Ministry instead of the Moscow-based Federal Security Service and Russian troops.

Russian forces pulled out of Chechnya in 1996 after rebels fought them to a standstill in a 20-month conflict.

Troops returned in September 1999 after Chechnya-based rebels mounted incursions into neighboring Dagestan and after about 300 people died in apartment explosions that Russian officials blamed on the rebels.

Even though the rebels are outnumbered and outgunned throughout the republic, they continue to inflict daily casualties.