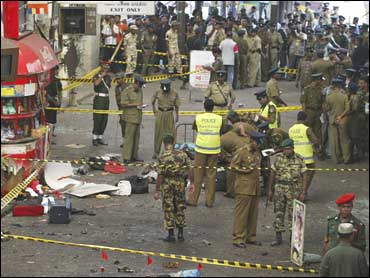 A suspected Tamil Tiger suicide bomber blew herself up Sunday at the main railway station in Sri Lanka's capital, killing 11 people and wounding 92 others as the government prepared to celebrate the nation's 60th anniversary, officials said.

The attack in the heart of Colombo came amid a major increase in violence in this Indian Ocean island nation in recent months. Government troops and separatist guerrillas have been battling in the jungles of the north, while suicide bombers and other militants have attacked civilians and military targets deep inside government-held territory.

"It is a suicide blast on Platform 3. The bomber has got down from a train and exploded," he said, blaming the Tamil Tiger rebels for the attack.

Telephone calls to rebel spokesman Rasiah Ilanthirayan's office were not answered. The rebels, who are listed as a terror group by the United States and European Union, have been blamed for more than 240 suicide attacks. They routinely deny responsibility for the attacks.

"I was near my counter and I heard a big blast. When I looked behind I saw a policeman bleeding," said Ravindra Pinto, a ticket inspector at the station.

"As I took him and rushed out, I saw many men and women on the ground," said Pinto, who was not injured in the blast.

Nanayakkara said 11 people were killed and 92 others wounded in the attack.

The explosion came a day after a bomb on a bus killed 18 people, mostly Buddhist pilgrims, in the central town of Dambulla, about 90 miles northeast of Colombo.

Earlier Sunday a grenade exploded at a zoo on the outskirts of Colombo, wounding at least four people, the military said.

The attacks took place as the government prepared to hold celebrations across much of the country Monday to mark the 60th anniversary of Sri Lanka's independence from Britain. The usually tight security across the capital was further heightened in recent days as troops searched cars and pedestrians ahead of a national ceremony Monday morning on the city's major coastal road.

"There are tight security programs being imposed," Nanayakkara said, but the security forces had difficulty stopping suicide attackers.

The Tamil Tiger rebels have been fighting since 1983 for an independent homeland for Sri Lanka's ethnic minority Tamils after decades of being marginalized by Sinhalese-dominated governments. The fighting has killed more than 70,000 people.

The military said Sunday that fighting between troops and rebels along the front lines surrounding rebel-held territory in northern Sri Lanka killed 32 rebels and two soldiers. The rebels could not be reached for comment, but the two sides routinely give differing casualty figures.

More than 700 people have been killed in intensified violence since the government withdrew from a cease-fire with the separatist Tamil guerrillas last month.