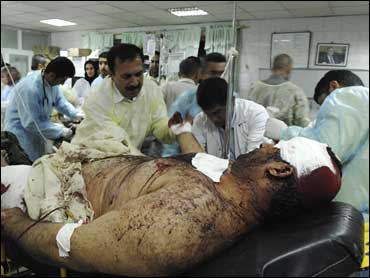 A suicide bomber struck a tent filled Monday with Kurdish funeral mourners, unleashing a huge fireball that killed at least 23 people in a northern town where Kurds and Arabs are competing for power.

The provincial security office said 23 people were killed and 34 wounded in the suicide attack in the town of Jalula some 80 miles northeast of Baghdad.

A member of the provincial security committee, Amir Rifaat, said 24 people were killed and 28 wounded. The difference could not be immediately reconciled.

Karim Khudadat, whose father was being mourned, said he was receiving visitors when the bomber struck.

"I was with my relatives outside the tent receiving people who came to offer condolences when suddenly the explosion took place," Khudadat said. "Suddenly a huge flame engulfed the tent and I was wounded in my head and legs."

A series of high-profile bombings this month has raised concern that insurgents may be regrouping as the U.S. begins to scale down combat operations and hand over security responsibility to the Iraqis ahead of a planned American troop withdrawal by the end of 2011.

The attack in Jalula was noteworthy because it points to rising tensions in the north between Kurds and Arabs over control of a swath of territory that the Kurds want to incorporate into their self-ruled region.

U.S. officials believe Kurdish-Arab tension is among the major flashpoint issues threatening Iraqi stability now that the threat posed by Sunni and Shiite insurgents has been diminished.

Last August a suicide bomber killed 25 people, mostly police volunteers, in Jalula, a predominantly Arab town where the Iraqi army forced out Kurdish fighters of the self-ruled Kurdish government last year after a standoff that U.S. officials feared would lead to armed conflict.

A Jalula resident who was wounded in Monday's blast blamed al Qaeda in Iraq, a Sunni Arab organization that typically carries out suicide bombings. He identified himself only by his nickname Abu Holman.

"Al Qaeda is targeting the Kurds because it believes that we are involved in the political process and collaborating with the Americans," Abu Holman said from his hospital bed. "There are still many al Qaeda hotbeds in our area."

Kurdish issues were at the forefront of talks in Baghdad between Iraqi officials and Turkish President Abdullah Gul, who arrived Monday for the first visit here by a Turkish head of state in more than 30 years.

Gul urged the Iraqis to close down the Kurdistan Worker's Party, or PKK, which launches attacks in southeastern Turkey from sanctuaries in northern Iraq.

"The time has come to remove the element that is a source of trouble," Gul said during a joint news conference with Iraqi President Jalal Talabani, himself a Kurd.

"We need to engage in a joint struggle to completely eradicate terrorism," Gul said. "A comprehensive cooperation is required. There is no doubt that a greater role falls to the (place) where the terrorist organization's leadership and camps are based."

For his part, Talabani said the removal of the PKK rebels was in Iraq's interest as well and called on the rebels to lay down their arms. The rebels have been fighting for autonomy in Turkey's southeast since 1984. The conflict has killed tens of thousands of people.

Turkey has carried out several cross border air strikes against rebel targets and is pressing Baghdad and the Kurdish regional government to step up efforts against the Kurdish rebels from their side.

The areas where the PKK operates are under control of the Iraqi Kurdish regional administration rather than the Arab-dominated central government in Baghdad.

Gul was to discuss the issue with the prime minister of the Kurdish region, Nerchirvan Barzani, in Baghdad on Tuesday.

Relations between the central government and the Kurdish regional authority have been strained because of differences over territorial boundaries and the limits of provincial authority.

Prime Minister Nouri al-Maliki has complained that the 2005 constitution gives too much power to regional authorities, including the Kurds. Kurdish politicians have accused al-Maliki of wanting to expand his power at their expense.

Those differences could complicate efforts to resolve any of the issues involving the Kurds, who make up about 20 percent of Iraq's population.