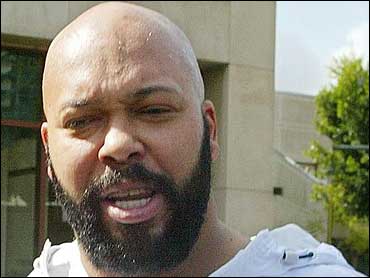 Knight, 40, was hospitalized in good condition, police said. He was shot during a celebrity-studded party at the Shore Club in celebration of the MTV Video Music Awards scheduled for Sunday night, said Miami Beach Police Officer Bobby Hernandez.

Sonja Mauro, a guest at the club, said a shot in the party's VIP section rang out shortly before 1 a.m.

"I was in there and I heard a pop and I ran out and got trampled," she said.

People attending the party began screaming and running for the doors, she said.

MTV and CBS Digital Media are part of Viacom, Inc.

In March, a judge ordered Knight to pay $107 million to a woman claiming she helped him start Death Row Records.

Superior Court Judge Ronald M. Sohigian ordered Knight and his companies, including Tha Row Inc., to pay Lydia Harris, who claimed she is owed money from the recording label she helped establish.

In 2003, Knight was ordered to pay $5.5 million to managers of artists who accused him of stealing one of their acts.

Knight was released from prison in 2001 after serving time for assault and weapons violations. He recently served an additional 10-month prison sentence for violating his parole and striking a Hollywood nightclub valet.