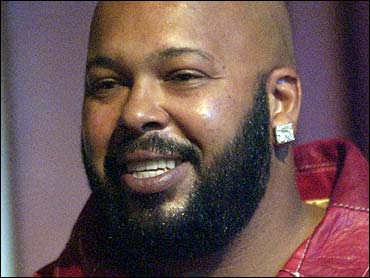 Police and probation officials have been reviewing video of the melee at the Vibe Awards show to determine if rap producer Marion "Suge" Knight played a role in the altercation.

Knight has denied any involvement in the incident in which a man struck Dr. Dre twice, sparking a brawl in which the attacker was stabbed and seriously injured.

Dre, who real name is Andre Young, met with authorities Monday at the Santa Monica police station and demanded that his attacker, Jimmy "James" Johnson, be charged with assault and battery.

Videotape shows Johnson punching Dre on Nov. 16 at the second annual awards show. Johnson was then stabbed, allegedly by Young Buck, a rapper who is a protege of Dr. Dre.

Young Buck, whose real name is David Darnell Brown, surrendered Nov. 19 to authorities and is scheduled to be arraigned Dec. 20.

Knight and Dre co-founded Death Row Records in the early 1990s and produced hits from rappers such as Tupac Shakur and Snoop Dogg. The two, however, had a falling out in the mid-1990s.

Knight was released from prison in 2001 after serving time for assault and weapons violations and the conditions for his parole ban him from having any contact with Dre.

Knight entered the awards show without an invitation and sat just a few feet behind Dre, who was receiving a lifetime achievement award.

Attorney Milton Grimes, who once represented Knight and now represents Johnson, denied any involvement by Knight.

"As far as I know, my client has no ties whatsoever to Suge Knight," Crimes told the Los Angeles Times.

The Times, citing unidentified sources, said Santa Monica police and agents from the state Department of Corrections have been interviewing witnesses and reviewing video footage to examine Knight's actions before, during and after the melee.

"We are conducting an investigation to determine whether any parole violations took place with (Knight) at the awards show," Alfred Martinez, Los Angeles regional parole administrator for the Corrections Department, told the Times.

"Mr. Knight has some special conditions attached to his parole, and we are working with the Santa Monica police to evaluate all the circumstances that took place that evening," Martinez said.