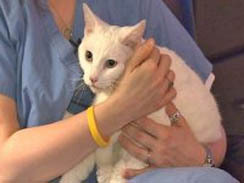 (CBS News) BOSTON - Rescuers are calling her a miracle cat. Her name is Sugar, a white ball of fluff that survived a fall from her owner's window on the 19th floor of a Boston high rise, reports CBS News affiliate WBZ-Boston.

"I look out my window all the time and I think, 'Wow, this is really high,'" Sugar's owner, Brittany Kirk told WBZ. She believes in the old saying about nine lives. "I think she probably used one or two or maybe eight."

When workers with the Animal Rescue League examined the cat, they found it had minor bruising on the lungs, but no broken bones, no cuts, and no serious injuries. They estimate she fell between 150 and 200 feet.

Surprisingly, rescuers say studies show cats have a better chance of surviving falls when they're from higher than nine stories.

"The cats were able to relax, orient themselves in a flying squirrel position with the legs spread out. It slowed their descent down," said rescue manager Brian O'Connor.

For more on Sugar's miracle survival, read the WBZ report or watch the video below: