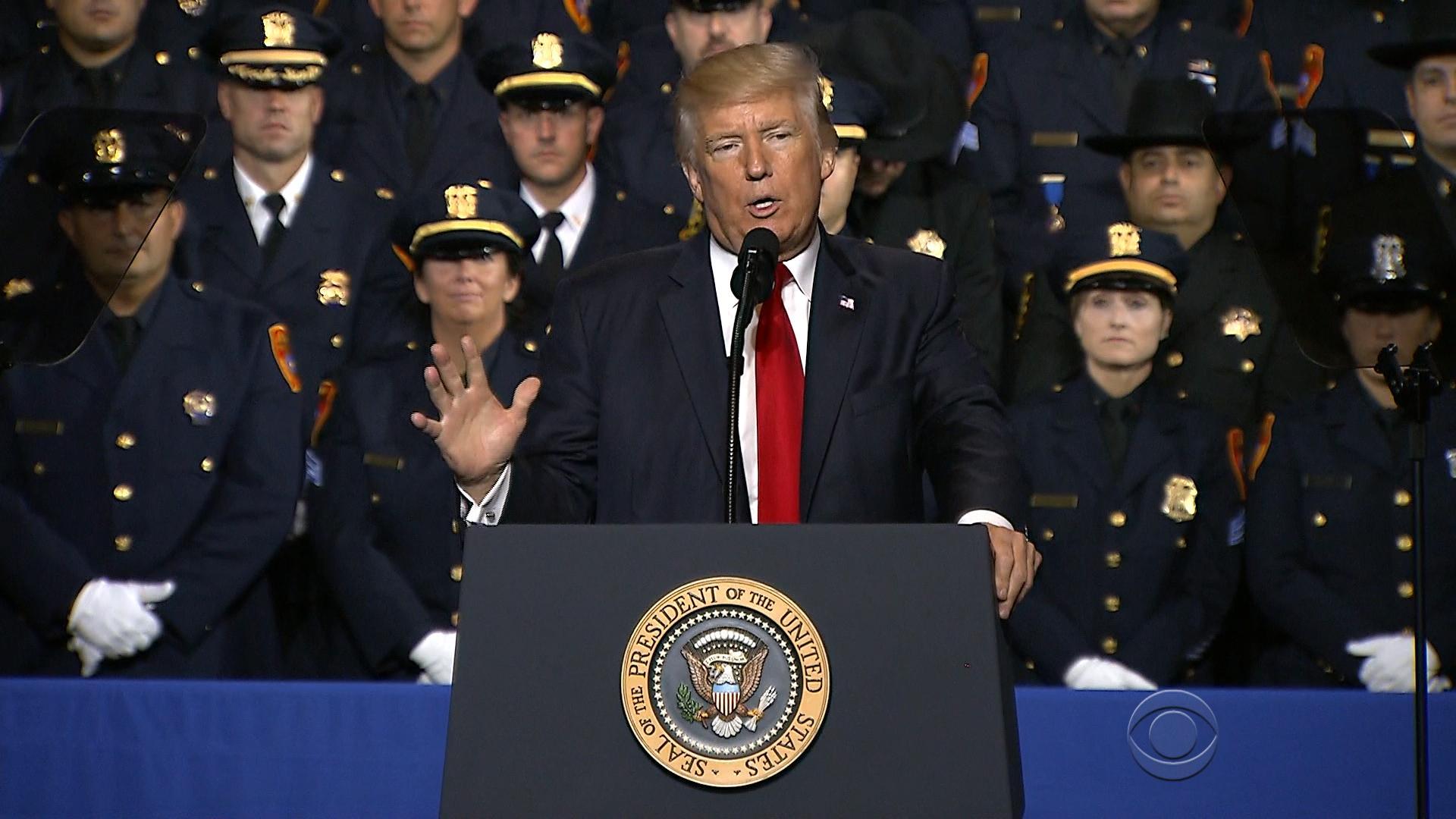 President Trump traveled to Brentwood, New York, on Long Island on Friday to address members of law enforcement about the federal government's crackdown on MS-13.

In Suffolk County, police said they have arrested more than 170 alleged members of the notorious gang, which is believed to be responsible for several high-profile murders in the area.

Mr. Trump told the assembled officers of the Suffolk County Police Department that they shouldn't be "too nice" when arresting members of the gang.

"I said please don't be too nice -- like when you guys put somebody in the car and you're protecting their head ... I said you can take the hand away, OK?" Mr. Trump said.

Mr. Trump's apparent encouragement of violence toward individuals under arrest alarmed many critics, but drew applause from the crowd.

The Suffolk County Police Department distanced itself from the comments later. The department tweeted Friday that they have "strict rules and procedures relating to the handling of prisoners. Violations of those rules are treated extremely seriously." In a second tweet, the department wrote "as a department, we do not and will not tolerate the roughing up of prisoners."

"I think they realize that was in jest," Suffolk County Police Deputy Inspector Milagros Soto told CBS New York. "They know what our rules and procedures are, and we would not accept that."

The police department's history, however, may tell a different story.

On Thursday, the FBI announced that officer Christopher McCoy was charged with forcing a suspect to perform oral sex.

The assistant director in charge of the FBI's New York field office called the behavior "outrageous." The police department plans to fire McCoy, according to Newsday.

In November 2016, former police chief James Burke was sentenced to 46 months in prison after being found guilty of shackling and punching a man who allegedly stole a duffel bag from Burke's car. Burke flew into a rage against the suspected thief, beating and yelling at him until a detective intervened.

Burke tried to cover up the episode, which eventually attracted the attention of the FBI. During a sentencing hearing, Judge Leonard Wexler said Burke had "corrupted the system" and compared him to a dictator, according to the New York Times.

"It stretched over three years," Wexler said of Burke's attempts to cover up the crime, according to the Times.

The incident with Burke is not the only blemish on Suffolk County police department's record. In 2010, two officers severely beat an unarmed 19-year-old suspect they said was combative, according to Newsday. The man, Kevin Turner, fell into a coma and eventually died.