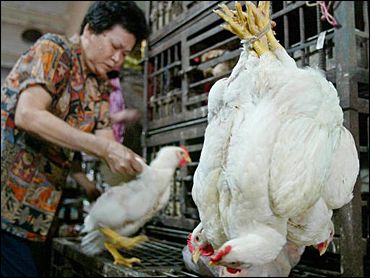 Sue Lowden, a Republican Senate hopeful in Nevada, has been widely mocked for earlier this week stating that, "before we all started having health care, in the olden days our grandparents, they would bring a chicken to the doctor, they would say I'll paint your house."

"I mean, that's the old days of what people would do to get health care with your doctors," she said. "Doctors are very sympathetic people. I'm not backing down from that system."

The Democratic Senatorial Campaign Committee subsequently set up a "Chickens for Checkups" website offering a fake form letter in which people could offer items in exchange for health care - 10 chickens for rickets treatment, five sets of overalls for "the vapors," etc.

The letter sarcastically concludes: "Thanks for coming up with such a simple solution to a complicated problem!" Jay Leno also mocked Lowden's suggestion.

Many expected Lowden, who is hoping to take on Senate Majority Leader Harry Reid in the general election, to back off the comments. Instead, she is standing by them.

Lowden spokesperson Chrystal Feldman told The Plum Line's Greg Sargent that "Americans are struggling to pay for their health care, and in order to afford coverage we must explore all options available to drive costs down."

The Lowden campaign also pointed Sargent to a letter to a Nevada newspaper from a rural doctor who said "I can state from personal experience that bartering works."

"I have bartered with patients -- for alfalfa hay, a bath tub, yard work and horse shoeing in exchange for my care," said Dr. Robin L. Titus, a former Republican candidate for Senate who ended her campaign three months ago.